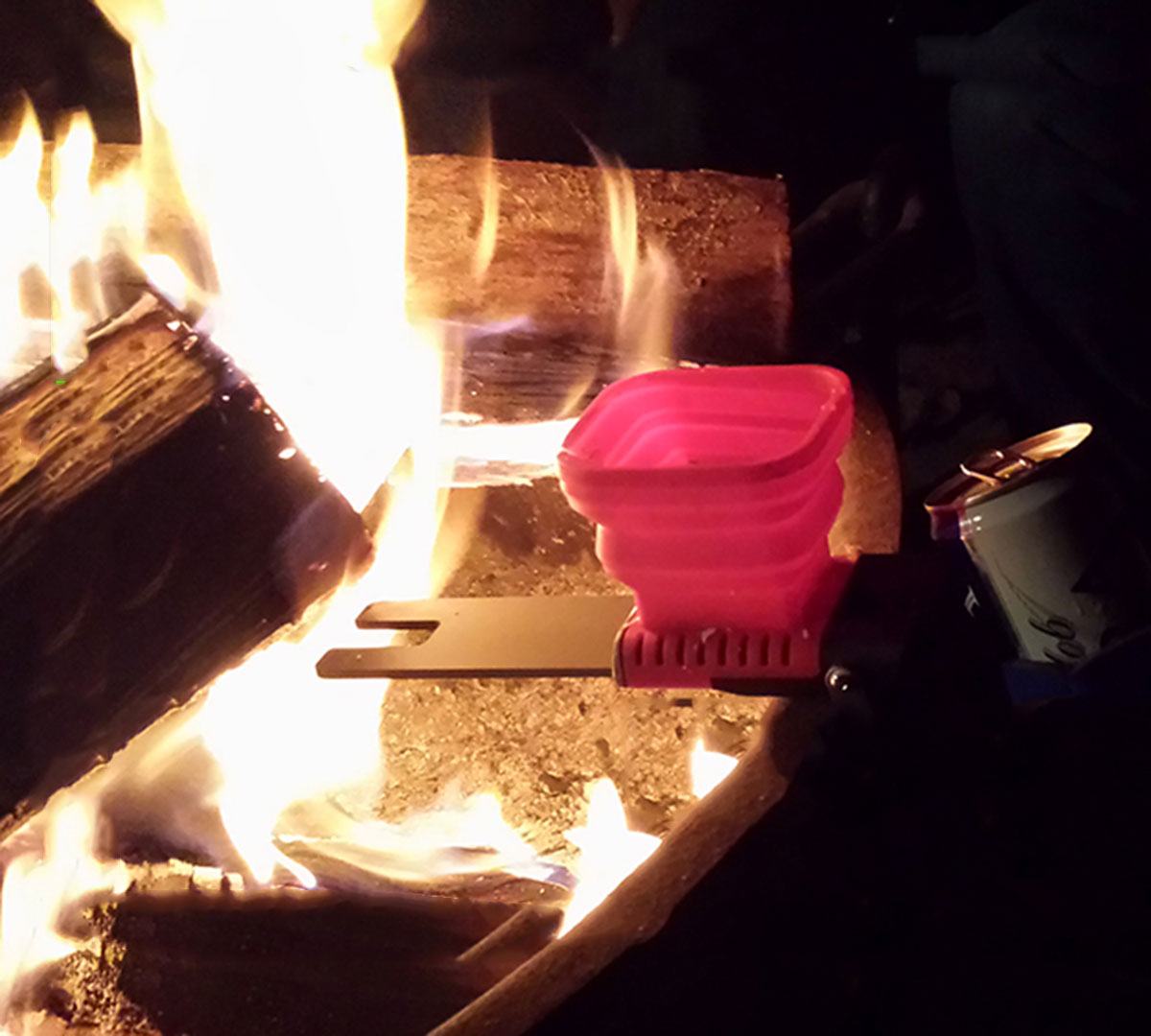 For many of us, even when we’re trying our best to “get away from it all” by heading into the forest to camp or hike, we still have our devices with us. Whether it’s our smartphone, camera, GPS device or about a thousand other things, we’re always consuming energy.

The trouble with that is that batteries die and finding a sustainable way to replenish them when off the grid is tricky at best. Today I’m going to introduce you to a product that uses two inherent elements to camping to generate power to charge and USB device you’ve got – the FlameStower. 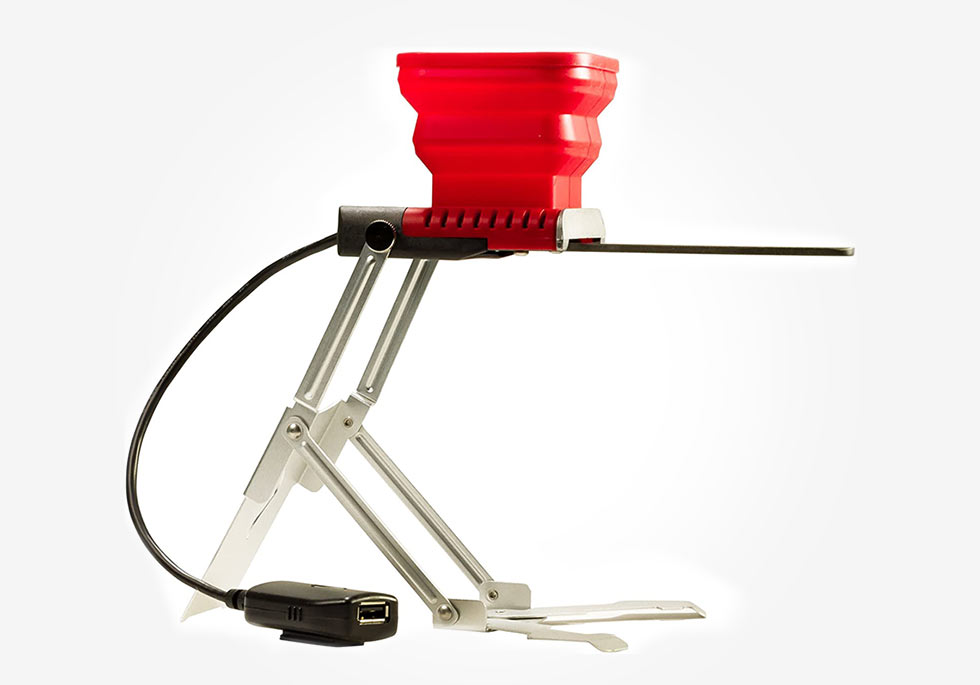 The FlameStower unfolded and ready to go.

FlameStower appears to be discontinued, losing the battle in this product category to BioLite and companies like Ajirangi.

Very similar to the FlameStower, The Ajirangi The miniO is a small and lightweight portable personal generator for backpackers. Weighing in at 350 grams / 12.3 ounces and using a collapsable silicone cup like the FlameStower, the MiniO claims to put out 5w to a standard USB port. It looks like a great, affordable alternative to the discontinued FlameStower. Check it out here. 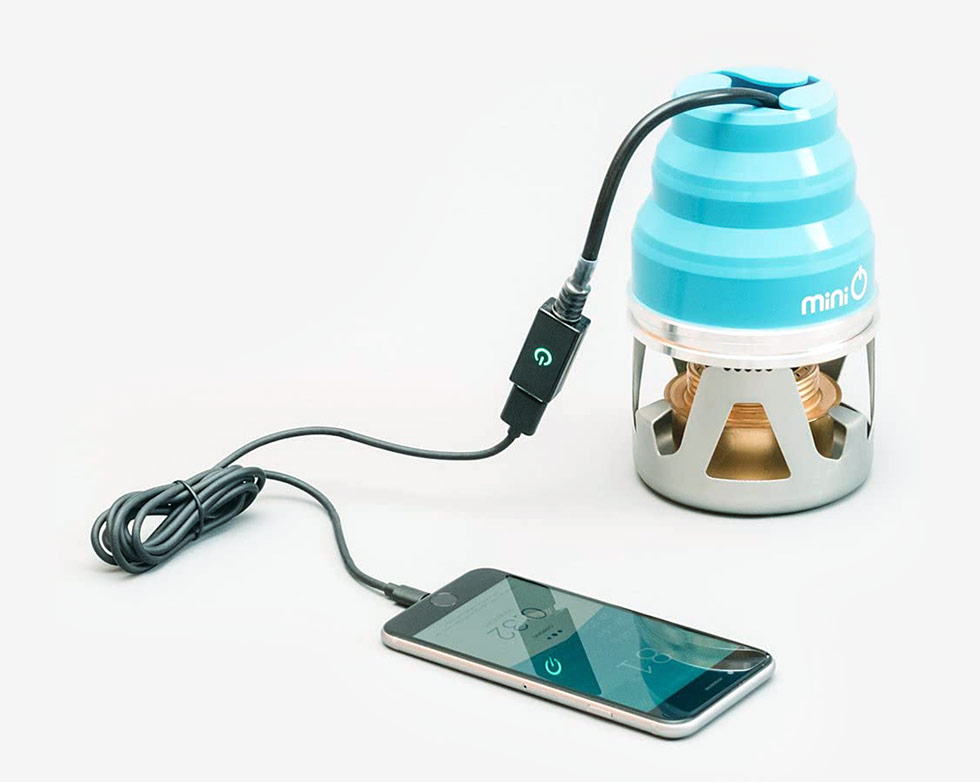 The Ajirangi Portable Thermoelectric Generator is the most similar product to the FlameStower now on the market.

Biolite continues to grow its product line, but is still making improvements to the BioLite CampStove. The CampStove2+ is an all-in-one wood burning stove, charger and internal battery. Check out Biolite at Amazon or our favorite outdoor store, Evo. 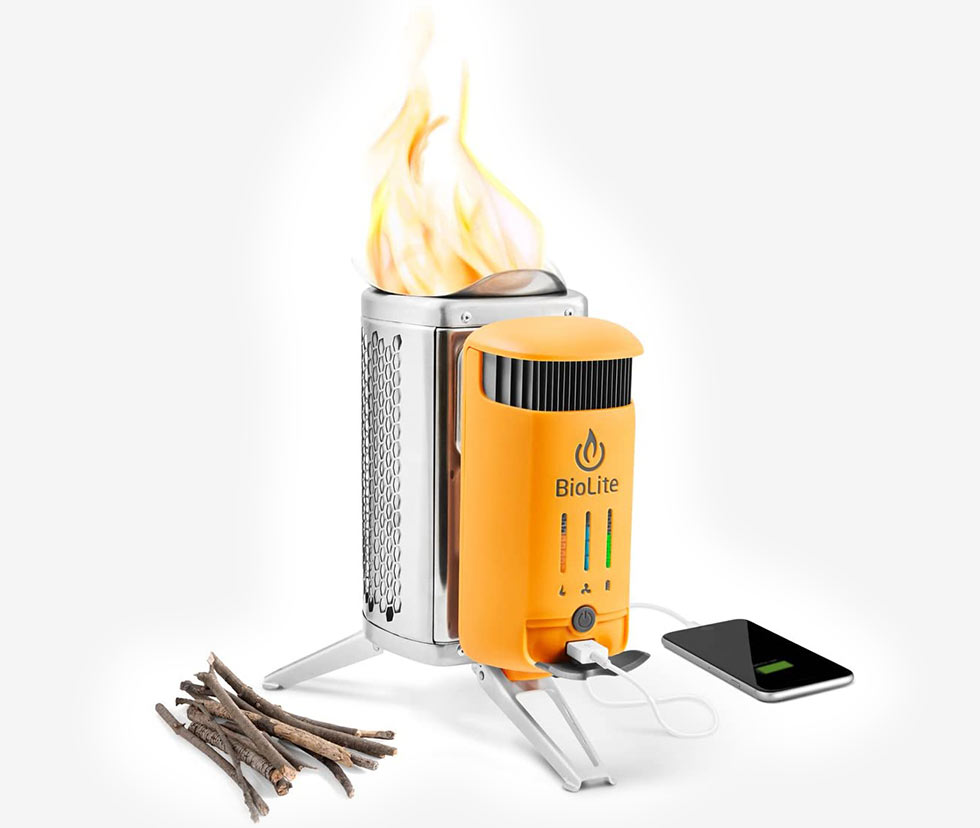 The BioLite CampStove 2+ is an all-in-one stove, generator and battery pack. Biolite also makes a bunch of accessories to complement your backpacking electrical needs.

To be honest, the use of the FlameStower is remarkably simple as you can see in the diagram below. After opening the unit to either stand or lay in flames – this can be in a campfire, fire pit or simply on a camp stove burner – you fill the collapsible silicon cup with water. That’s it.

OK but HOW does it work, right? Well, according to the folks at FlameStower:

The FlameStower Fire Charger works with the energy of your cooking or camp fires. Once the blade is in a fire, the thermal energy is transferred to the Thermoelectric Generator (TEG). The opposite surface of the TEG is in contact with the water reservoir – hot side gets hot, cold side stays relatively cool, and the temperature difference generates electricity.

The beauty of this is that it only uses a very small amount of water and fire. That’s it.

The FlameStower is dead simple to use which means that having to use it after having a few frosty, adult beverages around the campfire is no problem. Upon first putting the metal blade into an open flame it took about five minutes until the green status light on the charging unit lit and it was ready to go.

Now, the FlameStower won’t charge at the rate which your wall charger does but it will charge with the power (and speed) of a laptop USB port. To put that into real numbers, the FlameStower has a maximum output of ~2-3 watts while your wall charger (iPhone) is 5 watts. Another way to look at this is for every one minute of FlameStower charge time you’ll get ~2 minutes of talk time (depending on the type of phone and the strength of the fire).

When you’re done with the FlameStower, give it about 10-15 minutes to cool off and then fold it down into its flat form (see image) and you’re ready to go. The designers of this piece have built it to last for roughly 5000 charge cycles so, event if you camp, a LOT, you’re probably not going to have to buy another any time soon – or ever.

The FlameStower folded up for travel

The folks at FlameStower also have a new power solution that is currently on KickStarter (for 69 more hours as of this publication) called Candle Charger. This snazzy little device operates on the same basic principal although this time, it uses candle (or something like a Sterno) to heat a 1 liter pot of water. This both generates power and sterilizes the water.

I have battery packs that I use and love but if I can save one of those for an emergency, I’m all about it. In the case of the FlameStower, I believe this is a super simple to use and portable power solution that amounts to a set it and forget it solution. At $99 (or $72 at the links below) this is a simple and relatively affordable way to keep your devices juiced up even when you’re completely off the grid.