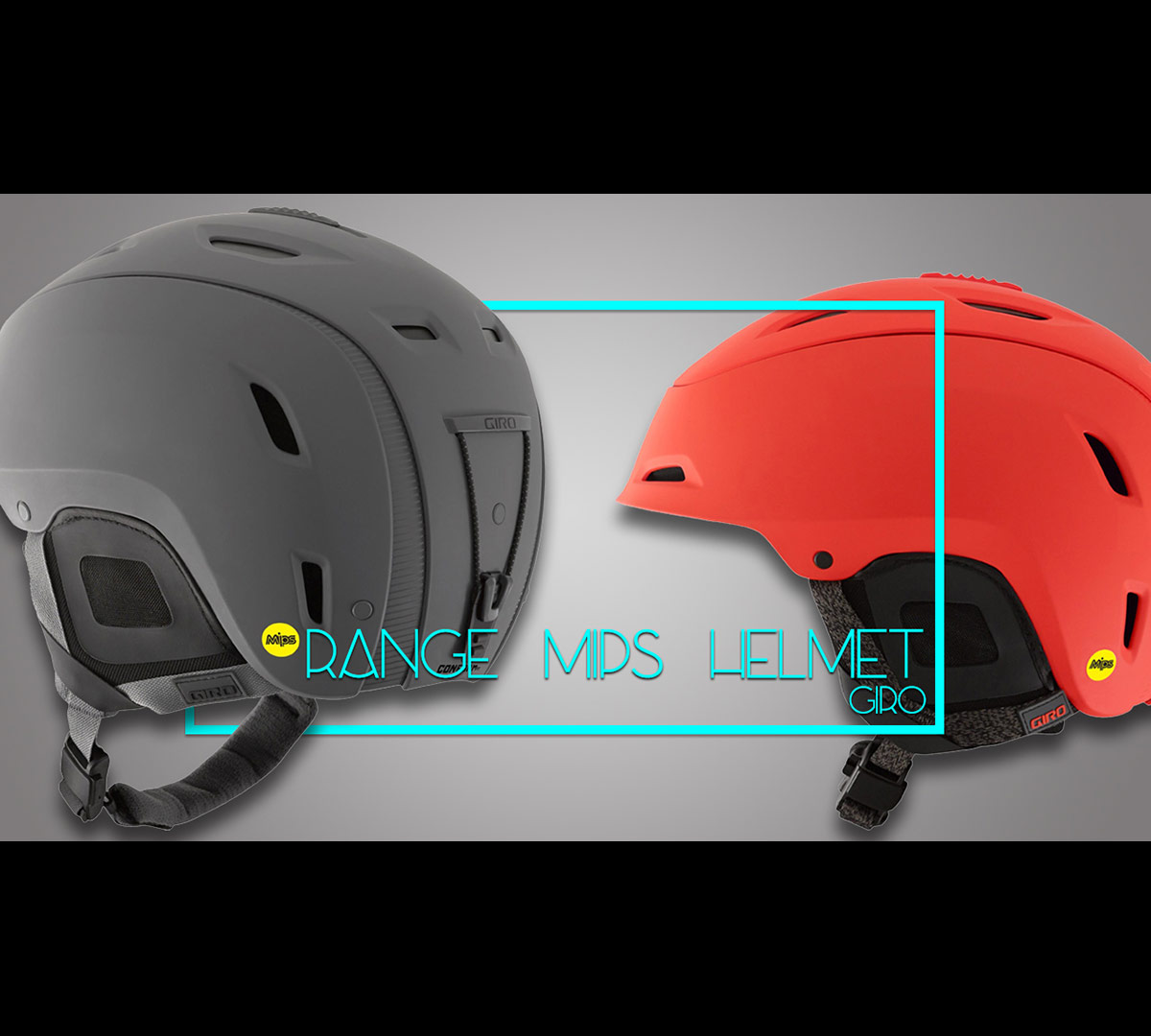 Pretty much all (snow, cycling, climbing) helmet adjustability comes down to the same basic system which is based around a dial-adjusted halo that either fully or somewhat encompasses the head and gets tighter or looser as the dial is turned. One of the challenges for helmet makers though is getting an entire helmet to shape to the head without sacrificing and enhancing safety. The Giro Range MIPS with its unique, two-piece shell aims to change the game and today we’re going to deep dive on this slick new lid.

All helmets are only as good as how they’re built so let’s start there.

First, the Range MIPS is a hardshell setup which uses EPP foam rather than more typical EPS foam. The reason for this is because the EPP material is more flexible and fits well into the conforming fit of the helmet’s profile. The shell of the helmet is made of two separate pieces which are what facilitate its unique adjustment system – but I’ll get into that in a minute. The first piece of the shell is runs from about the hairline all the way to the back, lower edge of the helmet while the second piece basically wraps around the remainder of the head and runs under the first. Built into the shell are twelve vents to control air flow over and around the head. Of these, six are adjustable to deal with variable weather conditions and temperatures while the two on the front of the helmet work with goggle vents with Giro’s stack vent system and the remaining vents act as exhaust. I found myself really liking the low-profile of the Range MIPS and the temperature control was on point.

Internally, Giro uses X-Static lining to keep off the sweat stank that comes along with long days on the snow. Under the liner is probably one of the most important part of the Range’s safety features and that is MIPS – Multi-directional Impact Protection System. The way that MIPS works is that there is a separate, thin, low-friction liner close to the head. This liner is attached to the outer shell of the helmet by a set of elastomeric anchors that allow the system to work but bring it back to center and hold the two pieces together. During an impact, MIPS allow the external helmet to move independent of the head which slows rotational forces assaulting the head which is meant to decrease chance of serious head and neck trauma. Now, it’s a bit hard to test an impact like this – even with our super high-tech testing labs (insert sarcasm here) but here’s a quick video rundown.

Rounding out the construction of the Giro Range MIPS is its goggle retention strap on the back of the helmet to keep things nice and in place. As for the ears, the padding in that area is audio compatible and pleasantly warm. One thing I should mention about that is based on the fact that my ears stick out a bit. Why does this matter? Well, in most helmets it doesn’t because the retention system is simply a halo tension but since the shell of this entire helmet conforms to the head, I can feel a noticeable difference on my ears. It’s not a bad thing and it’s not uncomfortable but after a long day of having my ears pinned down in ANY helmet I feel it and in this helmet I simply felt it about an hour sooner. 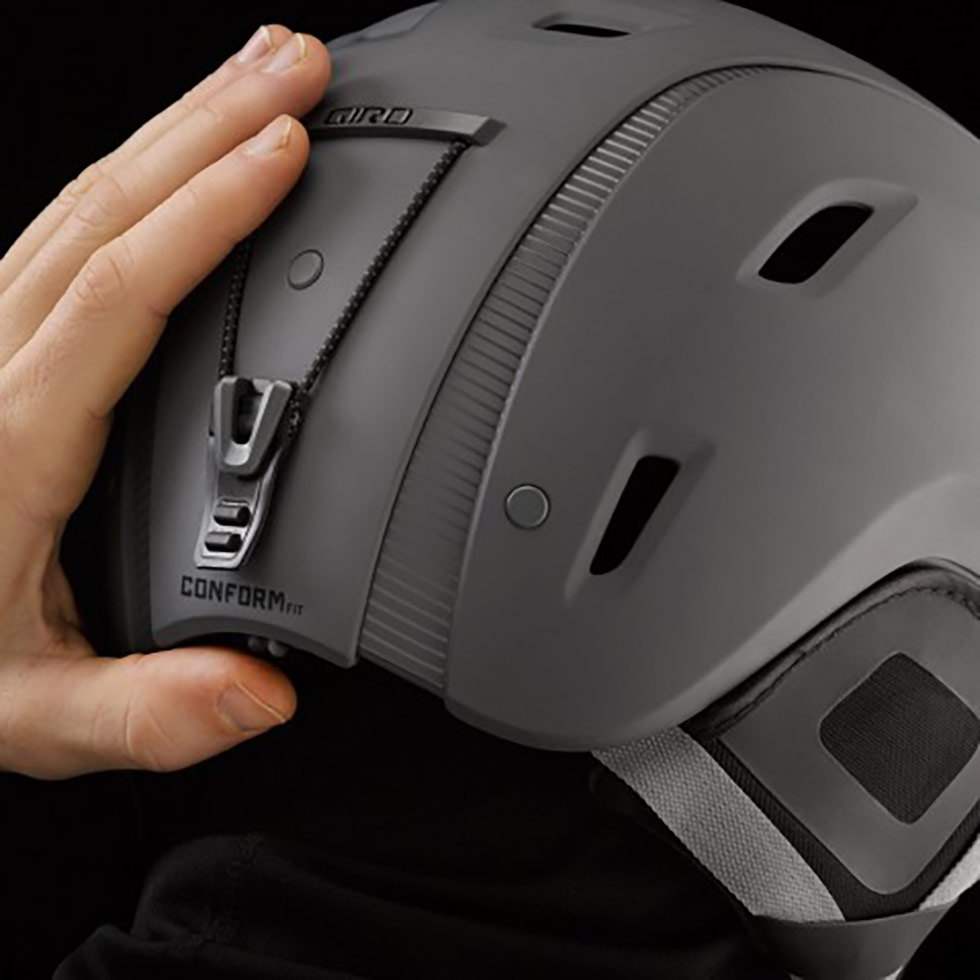 Now for the really cool adjustment system which Giro calls Conform Fit technology. The way this system works is that at the base of the skull there is an adjustment wheel seemingly embedded in the helmet – their InForm Fit2 system. The center piece of the hard shell which I mentioned  above acts as a sort of backbone for the Conform Fit. As the wheel is turned, the side piece(s) begin to flex inward or outward – depending on what you’re going for – underneath the central piece of the shell. There is also vertical tuning in the Range MIPS allowing for a wide variety of head shapes and goggle sizes.

For sizing I went with the large as is typical for my big-ass head and I’ve found it right on the money with sizing. Since the fit system in this allows so much room for adjustment – up to 6cm of the Conform Fit – I would say that if you’re on the lower side of a size range in that kind of vague area you’ll probably be just as comfortable in the lower size if you’d prefer. I absolutely adore the way this helmet hugs my head. Apart from the fact that it does a nice job of eliminating the mushroom-head effect of some helmets, the way the Conform Fit system fully wraps and flexes around the head is fantastic.

The chin strap in the Range MIPS is one that we see more and more these days and it’s the FidLock magnetic closure buckle – it’s called several other things depending on the manufacturer. This setup means that all you’ve basically got to do is get the two sides of the buckle close together and the magnets take care of the rest. It’s easy to fasten and undo with gloves on and the padding over the webbing keeps things comfy.

As I already mentioned above and in basically every helmet review we’ve done, we HOPE to leave the real crash testing to the boys with the big labs and fake heads rather than using ourselves as crash test dummies. So, once again, I am proud to say I’m not sure how this helmet fares in a crash.

As for the rest how I thought the Giro Range MIPS performed, I’ve got to say that this helmet is certainly at the top of my favorite helmets list. It could be a touch lighter but the way it fits is spot on for me. My head never gets hotspots and the lack of a halo to keep things in place is pretty damn genius. The venting is solid though on warmer days it can get a tad on the toasty side if you’re working hard. On the interior the padding and overall comfort does a very nice job of complimenting the Conform Fit system.

The last thing I’ll mention about the Range MIPS is Giro’s inclusion of a camera mount. In the past the Giro Edit [REVIEW HERE] used a screw-in mount for the front of the helmet and it worked fine but required a bit more manual manipulation to get things set up. With the Range MIPS, Giro has included a small mount that clips into a small slot right on the brow of the helmet. It’s very simple to mount the camera to the clip at the beginning of your day and only clip it to the helmet when you’re ready. 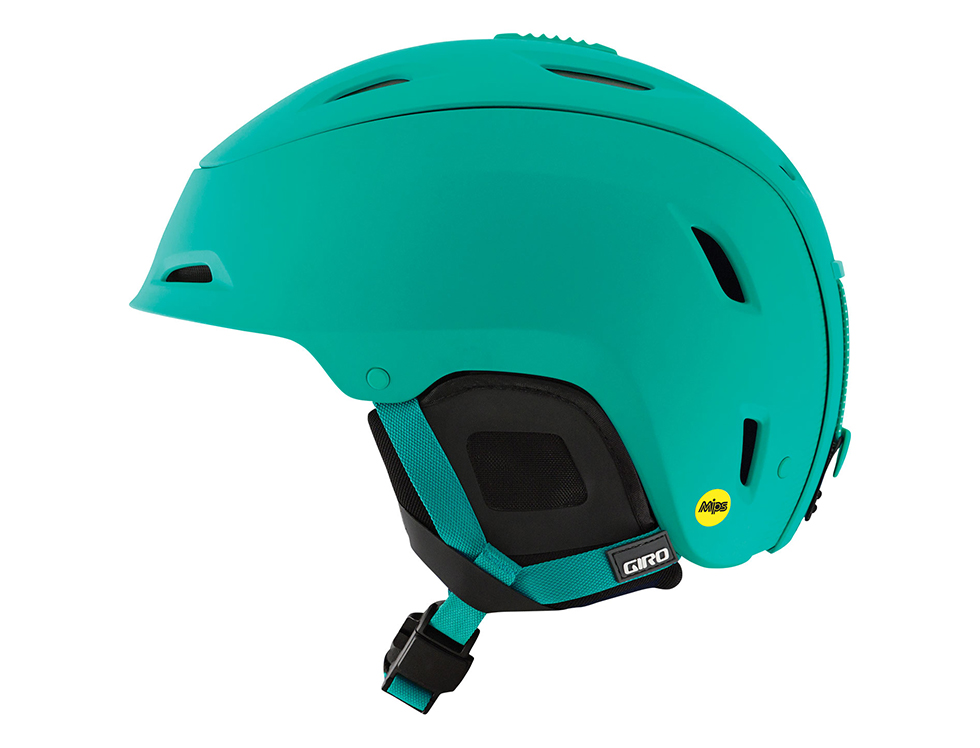 The Giro Range MIPS has a TON of features and sits atop the Giro line of ski and snowboard helmets. With all the bells and whistles comes a fairly hefty price though with an original retail price of $240 though we’ve found links below with it at about $180. If you’re spending long days on the snow and comfort is paramount, this is a helmet that’ll check the boxes for you.

See it at REI

← Rudy Project Rush Helmet Review Gear Bag: What Bike Tools Should I Carry On A Ride? →