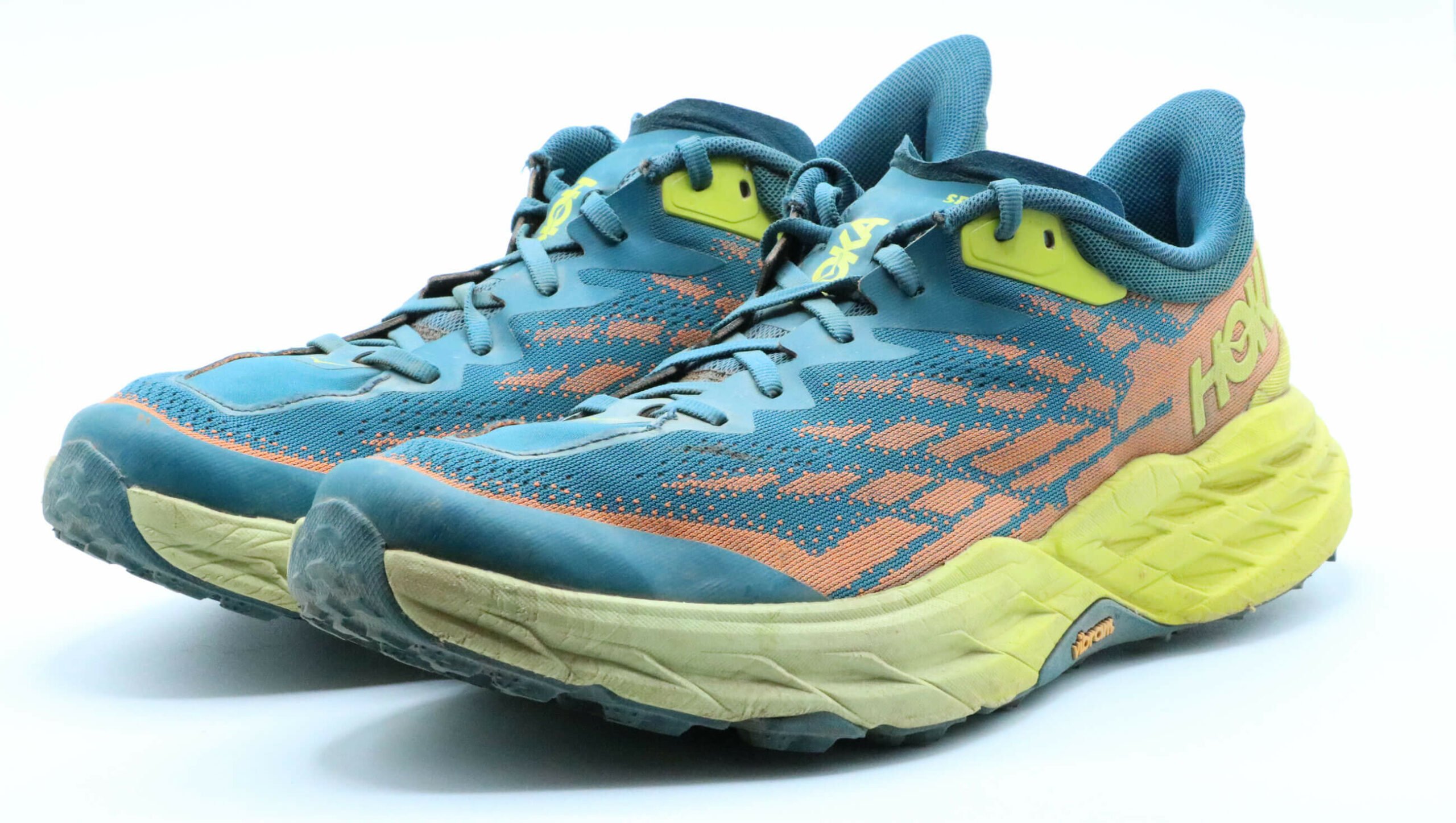 The last Hoka Speedgoat review I wrote was for the Hoka One One Speedgoat 2. On top of all the things in my personal life that have changed – for better or for worse – trail running is one of the constants which I treasure. After the initial rocky start with the Speedgoat 1, Hoka made huge strides in other, previous versions by adapting the shoe to a broader audience with a much better fit, construction and overall performance on a variety of terrain.

Today we’ll be getting in depth with the Hoka Speedgoat 5 – one of the most asked-about trail shoe updates around. So without and further ado, let’s get into the nitty gritty of this super popular trail shoe from Hoka.

The Hoka Speedgoat 5 is a new shoe from the ground, up and the first thing on the ground is the newly designed outsole made using Vibram Megagrip with Traction Lug. In this case, Vibram Megagrip isn’t just the outsole rubber but also the lug design which incorporates small microfeatures on each that adds surface area and hence, brings improved traction to the shoe. Looking at the lugs, it’s a clear additional texture which results in some nice weight loss.

Arranged in clusters around the perimeter of the sole and most of the forefoot, the Hoke Speedgoat 5 saves some weight by having outsole cutouts where traction isn’t as needed. The traction lugs are 5mm deep but are intended to adapt to terrain regardless of firmness.

Being that I live in Colorado, the terrain tends toward firm, often dusty trails interspersed with a few high alpine forest with a bit more softness in the mix. On hard trail the outsole grip of the Speedgoat 5 is fantastic. When that surface turns to more steep and often technical terrain, the dirt can get slide some but the apparent action of the traction lugs did their thing and reduced that to pretty much nothing with exceptional grip on trails.

The first time I ran in the original Hoka One One Speedgoat, it was the midsole that I fell in love with – despite the fit of that original trail rocket. The CMEVA midsole foam based, high-stack design was bouncy and fun without feeling like I was sinking into an unresponsive morass of overly cushy nonsense.

The Hoka Speedgoat 5 brings more of that midsole feel that I really enjoy. First, the material remains a fantastic middle-of-the-road in terms of durometer without having the firmness of granite nor the squishy, overly-cushioned feel which many a lighter midsole compound brings to the table. Part of the level of cushioning is obvious in its very Hoka-esque stack height of 38mm in the heel and 34mm in the forefoot for a total drop / offset of 4mm. The shape of the Hoka Speedgoat 5 midsole continues with the legacy of late stage meta-rockers in previous versions. This shape enhances a smooth ride – which I’ll talk a bit more about below – by enhancing the natural roll of the foot through the stages of the stride.

I’d also add that the midsole foam does rise to cup the rear half(ish) of the foot. In a shoe with more stack that some of its peers, this sort of thing can add some inherent stability which is a welcome addition. That said, it doesn’t leave me wanting some sort of weight reduction (well, more that I’d want in any shoe). With the Speedgoat 5 Hoka is increasingly more comfortable with its own construction and with the running style of its die-hard fans in realizing that the stack height is nothing to be afraid of.

Made from a double jacquard mesh, the upper of the Hoka Speedgoat 5 abandons some of the problem areas of previous Speedgoat models in a well thought out, lightweight upper which is not only functional but also incorporates recycled materials. The only overlays of the main upper material are in the TPU toe cap to protect from the abundance of obstacles on technical terrain (or, in my case, the one stick a half inch above the surface which manages to put me face down) and a mesh-covered support at the back of the heel cup.

The material of the jacquard mesh upper has very little stretch and then, in appropriate locations to allow with foot and toe room without being swimmy. Much of the ability of the shoe to accommodate for wide feet or even narrower feet comes by way of the vamp at the base of the tongue. The material in this spot is a bit more neoprene-ish and hence, provides form at the same time as give into the top of the toe box.

One part of the upper of this Hoka Speedgoat 5 review certainly cannot go without mentioning is the addition of the extended heel pull tab. In previous versions such as the Speedgoat 4, there was a more “normal” heel pull loop. In the Speedgoat 5, Hoka has gone with what looks like an extension of the top end of the heel counter. First, this is a very easy and convenient heel pull which accommodates fat fingers like mine which frequently seen too chubby to get into heel pull loops. Second, the extended heel tab move away from the achilles which mitigates abrasion in that area. One interesting thing I’ve seen mention of as it pertains to this heel pull tab arrangement is that it allows debris an easy route into the shoe. I can certainly see where that is a concern – and have experienced it – but I’ve got to say that I didn’t really notice some huge uptick in small rocks and grit inside my shoe.

The durability of the mesh upper holds its own on rugged terrain and through uncharted scrub. On off-camber terrain, the upper keeps up with the grippy traction of the outsole by holding the foot well in place and making this trail beast even more adaptable to a wide variety of technical trail.

When I talk about the way a running shoe fits (or any piece of wearable gear, really) I do my best to look not just at the fit relative to my very average foot but also to the fit as it relates to the application of that particular shoe. With the Hoka Speedgoat 5 being a shoe that is built to be appropriate for many different types of terrain – from more root-y and peaty trails of places like the east coast to the rocky terrain of places like Colorado and the western mountains – I do my best to find that range of terrain to  give the fit of the Speedgoat some more specific subjectivity.

First, sizing; the Hoka Speedgoat Five fits true to size. I wear a men’s 11 and found it exactly where it should be. Arron wears a size 13 and again, no sizing issues were found by him. As far as width, we both also found the Speedgoat 5 to be as advertised (a bit more on the toe box in a second). The elasticity of the tongue toward the vamp I mentioned earlier feels like it contributes well so forgiveness in the forefoot which I think those with wider feet could appreciate.

Finding a perfect fit in all aspect definitely makes for a comfortable shoe but since humans have an infinite number of shapes and sizes of feet, that’s a hell of a feat. As I just mentioned, the forefoot of the Hoka Speedgoat 5 is plenty wide with good room for splay in my average foot. That said, the toe box does come to a bit of a point which didn’t bother me but if you’re someone who often looks for a wider toebox, this is likely worth trying on. If you do find yourself needing more room overall, the Speedgoat Five is available in a wide option (EE).

In the midfoot, between a well-constructed tongue and ample (without being overkill) laces, my foot feels very secure, even on off-camber terrain. The heel for me is perfect for my foot shape. I felt locked in without having to hammer the laces down but I still felt nicely held in the heel cup when the trails move away from being smooth.

Earlier I talk about the varieties of terrain that different trail running shoes may be suited to. With the Hoka Speedgoat 5. this is one of the most obviously versatile shoes I’ve used in a long time. On rocky, rough terrains, the CMEVA foam provides plenty of underfoot protection without the need for any rock plate. On loose soil, the lug depth is enough to dig in without mimicking a baseball cleat. I will admit that I didn’t use this on any super muddy (which also tends to be super sticky) trails but I think the meta rocker profile would like help ease some of tendency of mud to adhere to flat parts of an outsole.

For the performance itself, one of the things brought up by people who’ve never run in Hoka running shoes is their concern for a stable ride which doesn’t end with a broken ankle due to so much stack height. The speedgoat 5 handles this without a second thought and event on very angled terrain, I felt just as stable as on a very minimal, low-to-the-ground shoe.

The thing I fell in love with in the original Speedgoat – despite the fit being terrible for me – was the super responsive ride. In the Speedgoat 5, much of the essence of that bounding feel is there but in a much more refined and capable shoe for a wide range of runners and terrains.

Since its genesis the Hoka Speedgoat has been a super popular trail shoe. Whether its someone looking to extend their running career by seeking out a more cushioned shoe, or someone looking to be a record holder of those precious KOM’s. This shoe is a fantastic evolution from the Speedgoat 4 by – as mentioned earlier – listening to actual runners and not simply throwing feedback of elites into CAD software.

The excellent grip, fun ride and superb upper make the Speedgoat 5 a must-have in your quiver of trail running shoes, especially if you’re looking for that Swiss Army knife of shoes.

At $155 it’s a reasonably priced shoe (which only costs about $124 when adjusted for ridiculous inflation) and again, the versatility and bang for your buck is fantastic. For me, I rotate through a lot of shoes but in my lead up to some big miles later this summer, the Hoka Speedgoat 5 is one shoe that won’t soon be collecting dust from neglect.