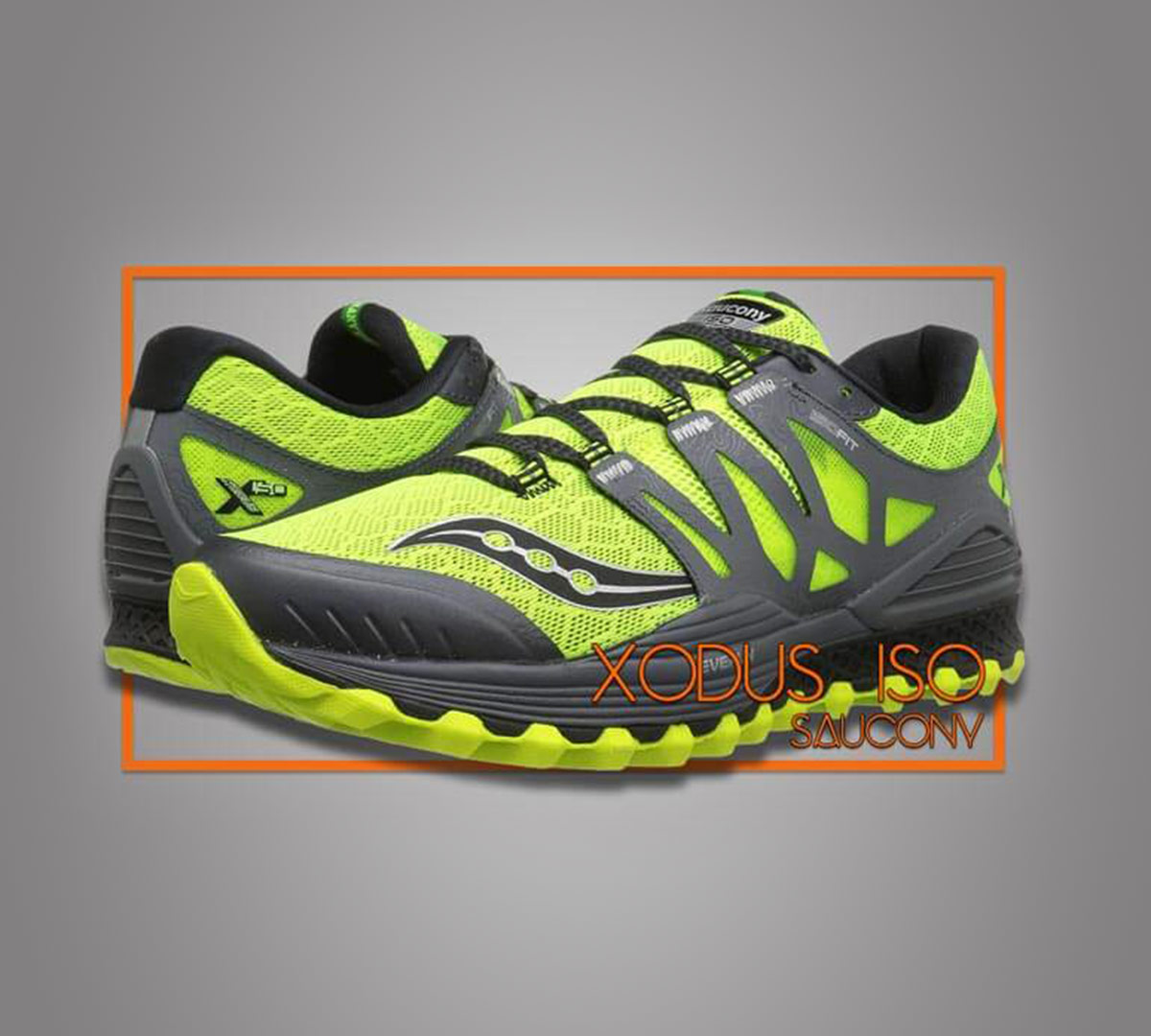 I really liked the first Saucony Xodus I tried [REVIEW HERE]. Sure, some people thought it was heavy and clunky but for me it was a shoe that could withstand a lot of punishment and had some great traction on a wide variety of terrain. In the latest iteration – which has been out for a while now – the Xodus ISO, I was intrigued to see how much of the first shoe would stick around and how much Saucony would rework. So let’s dig in and see what’s changed for the better…or worse.

There are a lot of changes in the Saucony Xodus ISO and the outsole is the first place where many of these changes show up. First, the material of the outsole has gone from being Vibram rubber to Saucony PWRTRAC rubber which the brand labels as “super-tacky” in their description. While I’ve certainly felt more tacky rubber on trail shoes, this is a marked improvement over the previous iteration and it is especially clear on flatter rocks where the rubber, and not the lugs, do the bulk of the sticking. While some softer, tackier rubber can sacrifice durability, it seems that in the ~45 miles I’ve got in this shoe that the rubber is all but unscathed – even retaining much of the finer detail on the lugs.

The layout of the outsole has also changed in a big way by seemingly incorporating what Saucony calls triFlex (though it’s not labeled as such anywhere on the Xodus ISO or in its description).

The midsole of the Xodus 6.0 (the model we reviewed before the Xodus ISO) was a highlight for me in that version and in this version it remains as such with the addition of some new(ish) technology. While the midsole material isn’t labeled as it has been in previous versions, I wrote to Saucony to confirm that the bulk of the midsole material is the same as in the 6.0 – Saucony PowerGrid foam. In the Xodus 6.0 this resulted in a pleasantly cushy feel which, on many trails, gave it the feeling of being in a road shoe. The Xodus ISO however, brings with it the inclusion of Saucony’s EVERUN foam – a TPU foam akin to adidas’ Boost foam which we’ve previously looked at in the Kinvara 7 and the Peregrine 6. In the Xodus ISO EVERUN manifests as a full-length top sheet just under the sicklier and above the strobel board. I’ll get more into this in the RIDE section below but for now I’ll say that this is a really nice addition that people looking for response will like. There is no rock plate in the 24mm heel/20mm forefoot stacked shoe (net drop of 4mm) however, due to the beefy lugs and two types of foam, I didn’t really find a need for one.

Once again, something I’ll save most of my comments for in the ride section is the flexibility of this shoe. In my review of the Saucony Xodus 6.0 I mentioned that I would have like to have seen more flexibility in the shoe and in this version I’ve got it. However, that seems to be a double-edged sword of sorts. On one hand, the flexibility that comes through allows the foot to operate a bit more freely than in the past while and conform to more angular terrain. On the other hand the flexibility in place takes away a bit of the front-end “pop” that some might want to see. I think the trade-off is kind of a wash especially since this is a shoe that wants to sling longer and less zippy miles than other, more speed-oriented shoes. I also noticed no big break0in period and the shoes felt good to go after a mile or two of getting used to them.

The upper of the Saucony Xodus ISO is where this shoe gets its name and as such, is one of the more noticeable aspects of the shoe. We’ve seen Saucony’s ISOFIT system show up in other shoes and in this case it is a welcome addition. From the outside the upper of this shoe appears to be a seamless piece of mesh. Internally however, the Xodus ISO does indeed have a few seams but they’re all smooth and shouldn’t be a problem, even for those die-hard sickles runners out there. The ISOFIT system basically means that the main mesh of the upper is all one continuous unit which gives a bootie-like feel as it integrates the tongue. Wince the tongue is part of the upper as a whole, it isn’t gusseted per se but it serves the same way a gusseted tongue would to keep out debris.

The external portions of the ISOFIT system are made up of strapping that begins as a welded overlay along the bottom of the upper that then pulls away as a series of mesh-reinforced, independent straps in the midfoot. These straps (three on each side) form a sort of cage around the foot and are topped with gillies for the laces. This system which includes the bootie of the mesh and the external cage does a really great job of hugging the foot and giving the wearer the ability to get a very custom fit and feel. The toe of the upper is capped by a rubberized ToeShell which did a nice job for me when clumsily kicking errant rocks and the like. At the opposite end of the shoe a plastic support frame defines a very rigid heel cup which is topped by a collar that looks a bit overstuffed but is, in actuality thanks to a quite compressible foam, really quite nice.

In the miles I’ve put on the Saucony Xodus ISO I have to say that this upper, for being a mesh that looks and feels fairly standard, has done an exceptional job on the durability front. It’s been in snow, mud, rocks, weed and everything in between and doesn’t have a scratch. The comfort of this app is also something that stands out. Like many bootie-constructed running shoes, the Xodus ISO brings a cohesive structure to the party which brings the foot and the shoe that much more harmony. 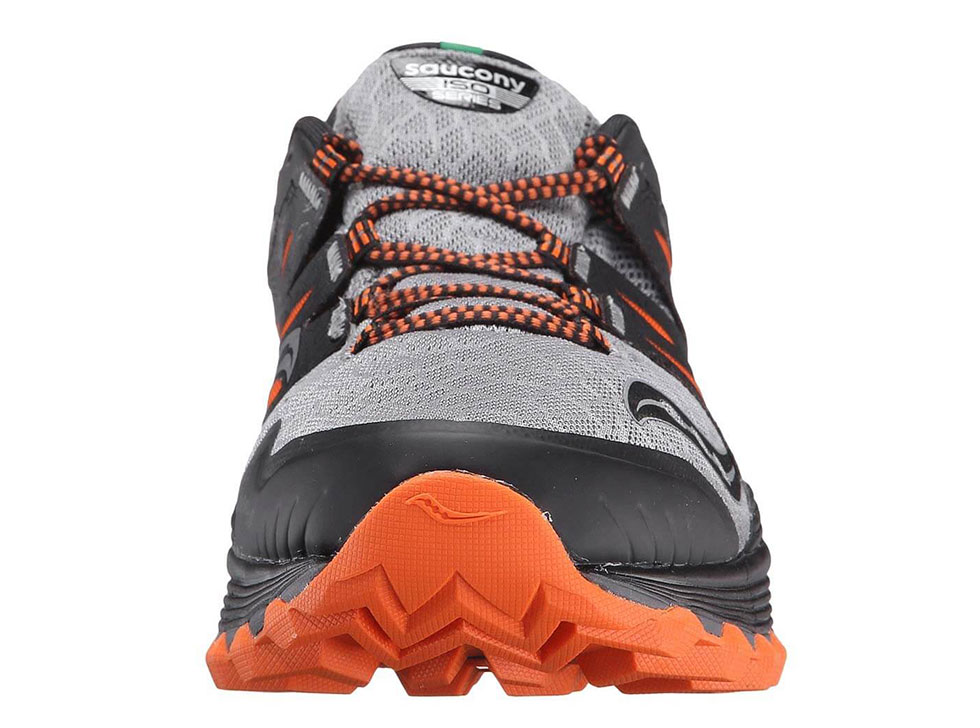 I’ve teased it above a bit and now it’s time to talk about the fit of the Saucony Xodus ISO. The shoe fits true to size in this trail beast and while it only comes in a standard medium width, the lacing and fit of the upper offers a bit of play so if you’re on the fence, give it a try. Starting from the rear of the shoe I found the very rigid heel counter to work very well for me though I think the structure is maybe a bit unnecessary and may ad a few fractions of an ounce that otherwise don’t need to be there. The star of the midfoot is the ISOFIT cage which, as I mentioned, hugs the foot nicely and offers a very customs fit. Across the metatarsal heads there was good room for me although moving into the toe box things do taper down a bit. To be clear though, the toe box is fairly standard and wasn’t constricting at all but it could be a bit wider (a la Topo Athletic or Altra Running).

In the Xodus 6.0 I felt like the beefiness of the shoe belied its ability to shred some rather agility-heavy trails. In the Saucony Xodus ISO this remains one of my favorite things. As the most aggressive trail shoe that Saucony makes, you’d think that the Xodus ISO would be ready to run over some serious terrain but without much bounce and the like. While it’s not really a super speedy shoe, I had no problem with my grip-confidence on some very questionable terrain. The PWRTRAC rubber stuck well and the TRIFLEX lug setup(which again, isn’t labeled as such) stuck to pretty much everything I needed it to.With this shoe being more flexible than its predecessor, the structure of the shoe lacks some of that pop but I found that the EVERUN topsole made up for that.

With the Xodus ISO Saucony has a shoe that is ready to beat on some very serious trails. For some, just as with earlier versions of this shoe, it’s simply more aggressive than they’ll ever need but if you get your feet on more technical trails ever, this shoe will be able to keep up – especially as the miles get longer and the hours add up.

At $130 the Xodus ISO seems to be continuing the general uptick in pricing that we’ve been seeing in the running shoe game by besting the Xodus 6.0 by $10 (be sure the check the links below for lower pricing on BOTH models). I don’t think this is a bad price for such a burly shoe that should handle loads of miles but it’s certainly not the cheapest thing out there. This is a badass trail killer that is ready for pretty much any terrain and tons of distance. The cushion and the construction mean it should get you through a lot.