Did you know that adidas Outdoor is technically a separate thing from regular ol’ adidas? Both branches of the brand sport the same logo and the same history (sort of) but the Outdoor side of things has made some pretty significant moves in the past few years to bring the adidas name into serious contention with other behemoths in the outdoor and adventure industry. Today we’re taking a look at a piece of gear that at it’s core is relatively simple but one that has a few small elements that make it stand out – the adidas Terrex Climaheat Agravic down hoodie.

So let’s start by talking about the what the Terrex Climaheat Agravic down hoodie (DAYUM is that a mouthful!) is made of and how it’s put together.

The shell of this jacket is made from Pertex Quantum GL which brings to the table an impressive strength to weight ratio. Honestly, this is one of those statistics that is oft cited but we’re not sure how to interpret it, so let me put if like this; during this current/past winter I’ve had the opportunity to wear the Terrex Climaheat Agravic down hoodie while hiking, snowshoeing, chillaxing and skiing and the latter is where the strength:weight thing showed up. On a day spent skiing in the trees I had more than a couple run-ins with some errant tree branches and twigs running into me. Even in instances where I could feel the fabric being pulled on there was no tearing, or even marks left for that matter. Coupled with that is the weight of this jacket which comes in at only 12.4 ounces, though in hand the exterior material is feather light and soft.

The down in this piece is, first of all, RDS certified which means that it is ethically-sourced down. The down itself, apart from its certification is 90/10 goose down with at least 800 fill (advertised as 800+). Now with all that downy goodness in there adidas Outdoor has taken the extra step to address something that often goes unnoticed and that is the stitch lines in between individual baffles. Most of the time the stitches of a down jacket/vest/etc. are devoid of down and even if down somehow crosses between the baffles (see: never), it would be so compressed as to compromise the heating capabilities of the material. To combat these cold spaces adidas came up with using alternating size baffles. This works because every other baffle is a bit larger than the ones above and below it. This allows the larger of the baffles to overlap the stitch gap and crossover into the domain of the lesser baffles, thus keeping the insulation consistent regardless of the presence of a stitch. For me, this alternating baffle system did a great job and on the coldest of days this winter I noticed no standout cold spots in between baffles.

To further make sure the heat in the Terrex Climaheat Agravic down hoodie stays where it’s meant to the neck and cuffs have a heat guard, which is basically a stretch panes around the circumference of those areas that seals in the heat and out the cold. I found these to work very well, particularly if you’re dealing with a windy day of a bit of powder in your face. A similar stretch panel material appears in the area of the armpit – though it is a bit thicker material – to allow for more freedom of movement without pulling too much on the hemline. 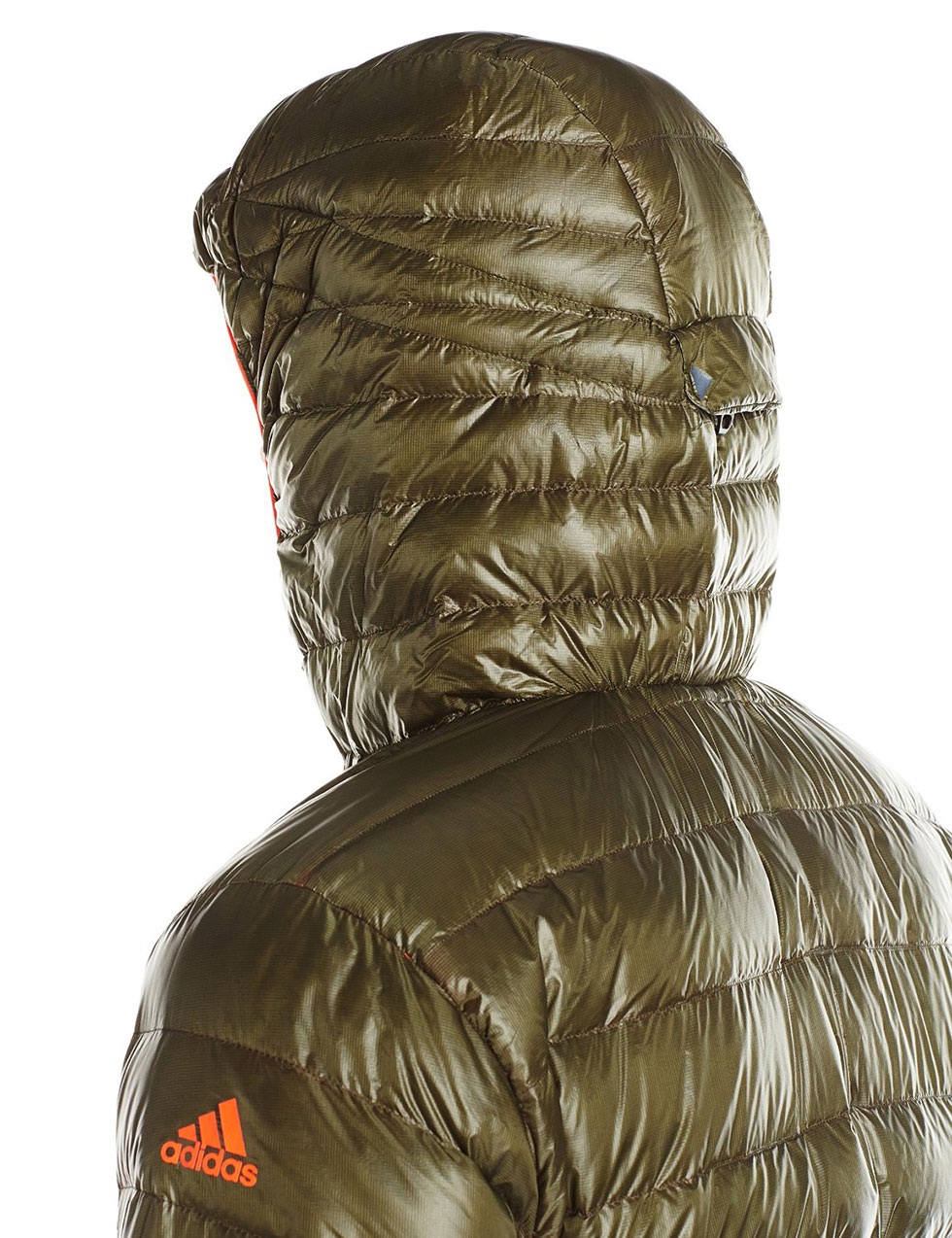 Lest you think this is just a singular-fitting jacket, there are several adjustment features that make up the Terrex Climaheat Agravic down hoodie. Starting with the hood, while there is no draw cord around the face, the fit of the hood is generally fitted quite well – though not helmet compatible. If you do want a bit of adjustability in the hood it comes in the way of a back-of-the-head pull cord which attaches near the temple and has good range of adjustment around the circumference of the head as well as vertical crown adjustment. While the hem of this piece is generally quite well fitted (something I’ll get into more in the FIT section below) nevertheless there are drawcords on both hips to further seal things off.

Finally, there are three pockets on this piece; one, left-breast pocket which also serves as a built-in stuff sack for the whole shebang, and also two hand pockets. All three are zippered with pulls large enough to not give you any trouble with gloves on.

Historically speaking, much of the time we’ve seen larger baffled jackets, their fit is a bit on the baggy side. Recently(ish) however we’ve seen a move toward a more fitted look and the Terrex Climaheat Agravic down hoodie definitely falls into the updated look and fit. First, the sleeves of this jacket are curved to fall with the natural, neutral arm position and to provide for a larger freedom of movement. The jacket (I wear a men’s large) had a very nice amount of room in the shoulders which I found very impressive relative to it’s fitted design. While the room through the shoulders and torso are in the sweet spot for insulation without being baggy, the hem is tapered with any fine adjustments coming courtesy of the aforementioned drawcord.

Sizing feels right where it should be for me, though I do think that you should definitely zip the jacket up fully to see exactly how the torso and hem fit your body shape. 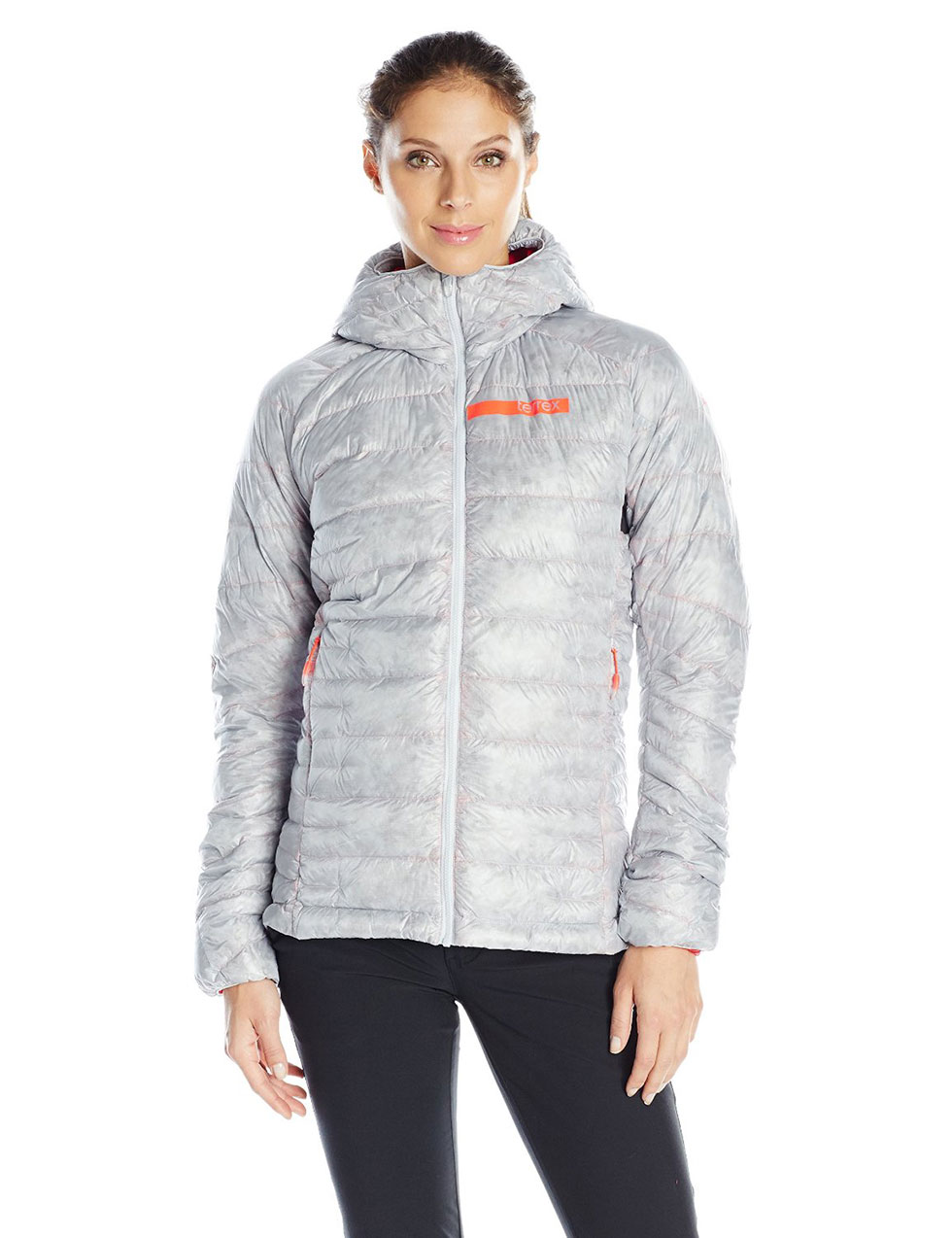 I’ve already covered the toughness of the outside of the Terrex Climaheat Agravic down hoodie so I won’t really revisit that here. What I will talk about though is just how this thing stands up to cold. First, the Heat Guards (seals) at the cuffs and neck do a really good job of creating a seal. In fact, there’ve been instances where I’ve worn a short sleeve shirt under this jacket and I found myself SO warm that I was sticking to the inside of the sleeves. From there on a long sleeve option was in order and kept me more comfy. This is a very warm jacket and while your internal thermostat is going to dictate what temperature you’re going to be comfortable wearing it, I think that you could easily have tis as an insulating layer in sing-digit temps and below.

The highlight of the adidas Terrex Climaheat Agravic down hoodie to me is it’s light weight coupled with the large baffle construction. The lines of the jacket are functional and eschew the baggy construction of years past and bring about a slick and comfortable update. A jacket like this doesn’t come super cheap though we were able to find it for around $250 at the links below.

See it at Amazon