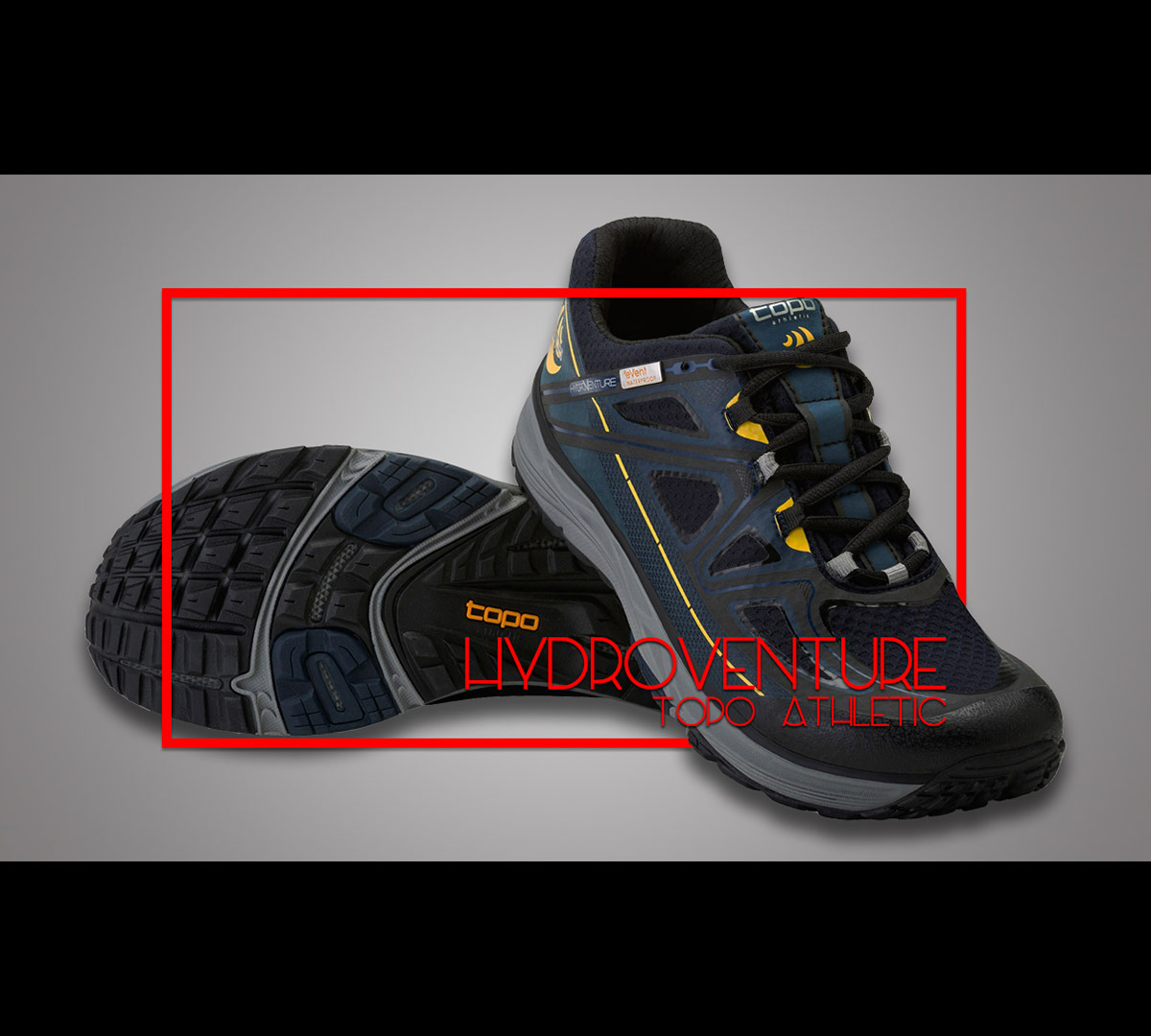 Isn’t it frustrating when you’ve got a favorite thing – for this example, let’s just say a trail running shoe – and you think, “Man, I really wish this was the same exact shoe but it had X”? Well, simply based on the name you might make the assumption that the Hydroventure from Topo Athletic is pretty much identical to the Runventure REVIEW HERE and in some regards you’d be correct. However, apart from the fact that the Hydroventure is a mudslinging, waterproof trail shoe with a very similar name, this shoe is quite different from its namesake.

The outsole of the Topo MT-2 is seemingly identical to that of the original MT. The outsole is made of 4.5mm deep lugs and has a ton of segments (10, depending on how you look at it) which are separated by generous flex grooves which allow natural foot function throughout. While the lug depth makes things grippy, the lugs themselves are not super aggressive. On one hand this means that more technical and loose trail may be more challenging but on the other hand, it means that the MT-2 maintains its ability to be a hybrid-esque shoe when you need it to be.

The MT-2 loves dry terrain and while it does well on some wetter stuff, the relatively flat surface of the lugs can get tripped up by deeper and more slick mud. As for durability, the MT-2 has held up very well over the ~40 miles I have on them on almost all trail with no real breakdown of the material beyond smoothing out the texture of the lugs.

If you’d like to check out that full review, click HERE. I do wish that there was a Topo trail shoe with more aggressive and cleat-like lugs for some more technical and loose terrain, but these performed very well on probably 90% of trails and on the other 10% they didn’t shy away from getting beat up.

So, you’d think with the outsole of the Hydroventure being identical to that of the Runventure and the MT-2, and the Runventure and the MT-2 having differently designed midsoles that the Hydroventure would be aligned with the design of its namesake – but you’d be wrong. The midsole of the Hydroventure, from and aesthetic standpoint, is basically exactly like that of the MT-2. Both shoes have stack heights of 13.5mm in the heel and 10.5mm in the forefoot for a 3mm net drop and both shoes use the same cushioned, but not overly so, and responsive midsole EVA foam.

What the Hydroventure adds that the MT-2 is without is a TPU rock plate which is embedded in the midsole foam. Below you can see a screenshot taken from an interview I did with Topo’s founder and CEO, Tony Post, where he was kind enough to share this technology with us (you can watch the full video HERE). As he mentions in the video, the rock plate in the Runventure (which is the shoe we were talking about at the time) is segmented so as to allow for flexibility and it does indeed come through with this shoe. In fact, I too the Hydroventure for a 12 mile run while testing it on a rainy day at one of the rockiest trails I know, Devil’s Backbone in Loveland, Colorado, and the rock plate performed wonderfully. Even knowing that there were gaps in the plate for flexibility, I didn’t feel a weakness in those areas.

Once again, as we approach the upper of the Hydroventure I feel like there is more similarity between it and the upper of the MT-2 than the Runventure. It’s just my opinion but this shoe has much more in common with the MT-2 in its overall design than the Runventure. I’m guessing they went with Hydroventure because something like “MT-2 Hydro” or “MT-2 WP” is a bit clunky to say.

So, diving into the upper let’s first talk about the mesh since this is both what makes up the body and the reason the Hydroventure has its water-driven name. On the exterior the mesh of the shoe is a tightly woven, and seemingly very durable, mesh with also seems to have a wee bit of give to it. It is the same mesh front to back though the underlying structure changes depending on the location in the shoe. ON the interior we find eVent waterproofing which is combined with the exterior mesh to make a single-layer laminate. This helps to cut the weight of the shoe which, according to Topo Athletic, makes the Hydroventure, “the <strong>lightest fully waterproof</strong> trail running shoe on the market today.” What does this mean in terms of the actual weight? My men’s 11’s come in at 10.5 ounces which is roughly .8 ounces heavier than the MT-2. Considering the fact that this shoe is waterproof and has the addition of a midsole rockplate, that’s pretty impressive. Yes, it’s on the heaviER side of things but all things considered I’m impressed. I should also mention here that the upper is not the most breathable thing in the world, but that’s a frequent trade-off with many pieces of waterproof gear.

The support structure of the upper is a series of 3D-printed on bands which I think do a fantastic job of keeping the foot locked in place. On the super rocky run I mentioned earlier I was truly impressed at how well my foot held within the shoe when I was on rocky and off-camber terrain. Contributing to this is also the laces of the shoe of which, all but the topmost lace are guided through ghillie loops that overlay a fully-gusseted tongue. The foam on the tongue is a good amount and is very flexible so as to avoid hot-spots in that area from folded foam across the top of the foot. The collar, which sits above the fairly flexible yet very well shaped heel counter and cup, could stand to have a touch less foam in my opinion in that it has more in this area than both the MT-2 and the Runventure. Rounding out the upper is a nice toe cap/bumper which is similar that that in the MT-2 and Runventure. It adds nice shaping to the toe box which enhances the “Topo fit” which I’m going to talk about next!

Sizing of the Hydroventure is right where it should be and spot on with industry standard. However, as I’ll touch on in a second, if you’re unfamiliar with the “Topo fit” you may feel like it’s a bit large simply because of the toe room. It’s supposed to be that way so don’t jump the gun and find yourself in a shoe that’s too small.

Once again the fit of the Hydroventure is excellent as we’ve found in pretty much every Topo model we’ve tested. The heel of the shoe holds the foot very well in place, even on ugly terrain. The midfoot continues the custom-esque fit and fell with lots of room for adjustment within the shoe body and the laces (keep in mind though that you may have to do some playing with the gusseted tongue if you have a particularly low-volume foot). Finally, all that close-fitting in the rear and midfoot blooms in the forefoot as the toe box is shaped to a natural foot. There’s plenty of room for wiggle and splay without being swimmy. As I’ve mentions in other Topo Athletic reviews, the fit of this shoe continues to be what shoes should aspire to.

With Topo, one of the things that’s always stood out to me with regard to the ride is what I’ve referred to in the past as “quiet elegance”. This is something I feel in that the shoe isn’t one that you’re blown away by a particularly bouncy midsole or any one thing that makes you go, “Woah, that’s different!” Rather, it’s just that the shoe provides what I’ve wanted without trying to do go beyond and have one aspect or another dominate the total experience. This same feeling comes through in the Hydroventure with a coupe of caveats.

First, the eVent waterproof aspect of this shoe is awesome. While it’s not something that jumps out on most runs, I will happily admit that I found myself seeking out mud and puddles when the weather brought them my way. The other caveat I have – and one that is strictly linked to the ride – is that this feels like it has an ever-so-slightly less responsive feel than some other Topo models. This isn’t to say that it’s bad by any stretch, it just seemed to sit even further in the background of my running consciousness. On the one hand, this is a good thing because it’s just furthering that sense of letting the feet and body do their thing without interrupting. On the other hand, if you’re looking for something super poppy and responsive, this may be a bit on the quiet side. Honestly though, things like this are so in the feet [sic] of the beholder that it’s something that bears trying out before making a judgement for yourself.

Now the thing that I’m less than thrilled with is the price of this shoe. In the past, the price of Topo Athletic shoes has been something that I’ve been extremely impressed with but with the Hydroventure there is the consideration of using a more expensive upper material – eVent – and the process which using that properly requires. Those things all contribute to this shoe coming in at $130. If you need a waterproof shoe in your arsenal I think this is a good one to have and is quite worth it, but that’s definitely a subjective call.

As Topo continues to expand their line in an intelligent and conscientious way, I’m glad to see that trail is an important part of that. As I mentioned I’d love to see a model at some point with a more aggressive and technical-appropriate trail runner. Lest you think that this means the Hydroventure isn’t ready for that kind of thing, fear not! The Hydroventure is a shoe with good traction, tons of durability and the fact that it’s waterproof to boot is a fantastic bonus when precipitation is part of your run.