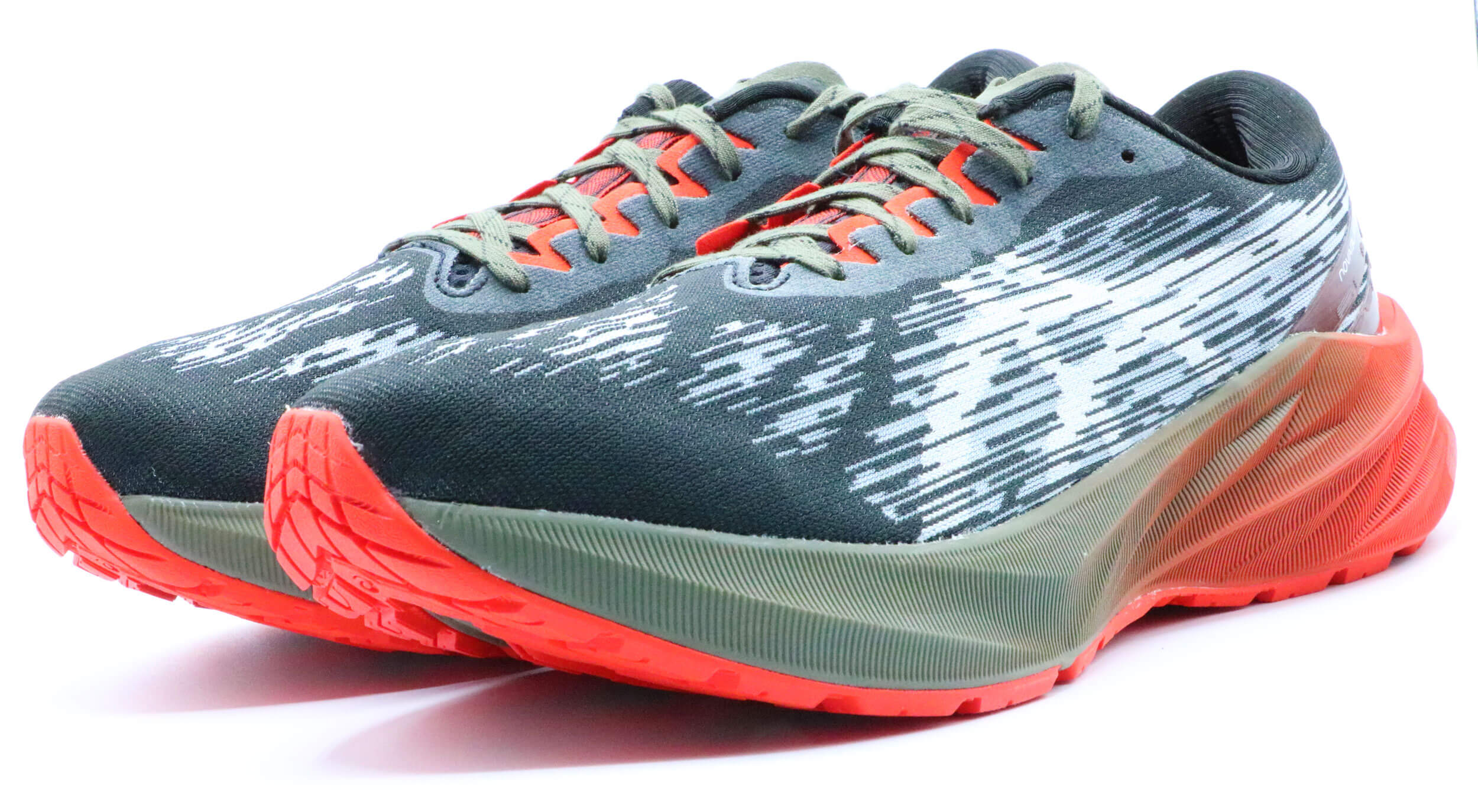 Get ’em on Amazon.com

For its outsole rubber the NOVABLAST 3 TR sports Asics’ AHAR (Asics High Abrasion Rubber) which is a designated as having “two times” the durability of traditional rubber compounds. Similar to the New Balance FuelCell SuperComp Trainer which we reviewed recently, the outsole centers around a kind of midsole void and the lugs are laid out primarily around the perimeter with the exception of the forefoot where there is an additional, central lug unit for impact resistance under the metatarsal heads. There are an flex grooves integrated into the outsole material in the front half of the shoe and the lugs depth is 4mm.

My Take: While the Asics NOVABLAST 3 TR does sport a trail-specific outsole – and as the road version of this, the NOVABLAST 3 is available – this shoe has an outsole that doesn’t shy away from roads.

Now, would I use it on roads all the time? No, mostly because I wouldn’t wan to break down the lugs to the point that they were completely ineffective on trails.

So how do the lugs of the NOVABLAST 3 TR perform? Well, on smooth trails and groomed singletrack, the traction, even on twisty, turny terrain is good. On some more more dry and pebble-y (think small pebbles or large grains of sand/dirt) the lugs don’t quite bite as much as they could due to the fact that they’re relatively flat.

How about rocky, technical trails? While I definitely have used these on trails like those, I wouldn’t say that it’s their strong suit. On flatter and broader rocks, they do well and the AHAR rubber is quite grippy. However, on more angled, mid-size and off-camber, rocky terrain, the void in the outsole to make way for the trampoline-inspired outsole design (which we’ll get to in a moment) lacks rubber coverage and since it’s just foam, doesn’t really grip.

From a durability standpoint, the AHAR rubber has really held up well. While I have taken this on technical trails, the majority of my miles have been smooth, flow-y running trails which are what this outsole caters to. The foam in the outsole/midsole void does have a few dings where sharper rocks have left their mark but it doesn’t affect performance.

Made from Asics FF Blast+ Plus foam (FlyteFoam), the midsole of the Asics NOVABLAST 3 TR – as well as its road running sibling – is designed to evoke a geometric, origami flavor. Additionally, the colors of the midsole (and the upper for that matter) are designed with the Japanese phrase “shirin-yoku” (森林浴) which is the practice of “forest bathing”. It has stack heights of 31mm in the heel and 23mm in the forefoot for an overall drop of 8mm.

While the FF Blast+ foam itself is meant to be lightweight and energetic, much of the build of the midsole that brings energy return to play is in the trampoline design of the midsole void I mentioned above.

This void means that the weight of the foot pushes down into that space and then, by way of the foam itself and the arched shape of its construction, the runner is propelled upward and forward.

My Take: The first thing I should mention about the midsole of the NOVABLAST 3 TR is that it’s not quite as thick as it looks. Mostly in the heel of the shoe, the midsole foam actually comes up around the heel quite a bit probably by a good 1/2 inch (13mm-ish) making for a very supportive heel design. This kind of give the illusion of more material actually under foot while adding some extra lateral stability to the shoe.

Also interesting about the midsole of this pair of trail running shoes is that there is no midsole plate of any kind. This means no carbon fiber, leaf-spring type of plate AND no rock plate. Despite the lack of a carbon plate for that spring action, the midsole of the NOVABLAST 3 TR does have some of that rigidity you’d find in a running shoe with more internal mechanisms.

As for the lack of a rock plate – which I’ll touch on more in the ride section below – for this sort of a trail running shoe which isn’t really built for rocky and technical trails, it doesn’t bother me. Now, if you go running on a lot of that sort of technical terrain you may find yourself wishing there was a rock plate but with groomed singles track, smooth trails and dirt roads as its bread-and-butter, it’s no big deal.

The other aspect of the midsole as it pertains to more rocky terrain is that the midfoot void in the outsole leaves the midsole foam very exposed in that area. This means that rocks and other pokey things looking to take a bite out of the NOVABLAST 3 TR’s midsole are free to do so.

So with that, I wouldn’t recommend this for your daily running shoe if all you’re hitting up are rocky trails simply from a durability aspect.

The upper of the Asics NOVABLAST 3 TR is constructed primarily from a tight Jacquard mesh. Externally there are  no seams except at the rear of the heel. There is an internal mesh gusset which is only partial and stops below the midfoot.

The tongue is made from the same, slightly more padded mesh as the gusseted sleeve is relatively thin and incorporates a tongue wing construction. Designed to reduce tongue movement, this wing-esque system splits the tongue on either side of the tibialis anterior tendon.

Through the throat and lacing of the NOVABLAST 3 TR there is a double layer of welded and reinforced material and ample lace length. In the rear of the shoe there is a substantial amount of collar padding which extends well into the heel cup. In addition to the aforementioned FF Blast midsole designs helping to shape the heel cup, the material of the upper provides quite a bit of stiffness to uphold the shape.

My Take: While I generally tend toward louder, brighter colors, I must say that I do like the “speedy” looking upper of the NOVABLAST 3. The mesh upper itself doesn’t really have any stretch but it also gave me plenty of room for my foot to not feel imprisoned while also giving enough shape and support for more zippy turns.

The tongue wing fit system seems to keep the tongue well in places, but it also seems like it may be fixing a problem that isn’t really there – at least for me – because the midfoot gusset holds the tongue in place on its own.

The foam in the collar and heel cup is very comfortable but feels to me like it could probably provide the same amount of fit and comfort if it were cut in half – thus saving a bit of weight.

As for the heel cup itself, it is quite rigid as I mentioned, which means a well-formed heel cup but if the foam I just mentioned were a bit less, it would be a better fit with a bit more flexibility, particularly moving toward the midfoot.

First, sizing; the Asics NOVABLAST 3 TR fits true to size for me and my men’s size 11. BUT, I would add that it feels like its could just barely be on the larger size of the range by like 2mm or so. For a trail shoe which likes smoother, more groomed terrain – something I’ll get into below in the ride section – this slightly roomier fit does well.

Moving front-to-back, the toe box of the NOVABLAST 3 TR definitely narrows toward the toes. Not overly or uncomfortably so, but it could use a bit of additional room on the lateral side of the toe box.

The transition from forefoot to mid foot is a good one with the lightweight gusset in the midfoot actually creating more of a “hug” than I was anticipating. It gives a secure feeling in this area without hammering down on the foot – unless of course, you’re someone who like to over-tighten shoes.

As I mentioned in the upper section above, the heel cup of the NOVABLAST is very comfortable but has more foam that I think it needs. There are definitely some weight weenies in the running world who would love to shave picograms if they could and slimming down the padding in the heel cup of this shoe is one place where that could happen without sacrificing comfort with minimal redesign.

Finally, where the midsole foam rises above the footbed does indeed make for a bit more of a stable feel in the rearfoot. With the soft midsole foam though, I’m not sure it really provides much in the way of lateral support on sharp turns or it provides more of a (effective) placebo effect.

Before I get into things like the responsive rebound, pace and the like we should talk about what kind of trails the Asics NOVABLAST 3 TR is going to find as their sweet spot.

For rocky and technical trails, I simply don’t think the outsole design is going to stand up to those sorts of things – especially as a pair of daily trainers. The exposed midsole foam on my shoes definitely shoes places where pointier bit of terrain have gone to town on it and the lack of a rock plate is also quite obvious.

However, the trail I run most for testing is one which is largely smooth singletrack. On this kind of trail – the kind where a livelier ride and responsive midsole make you want to push a faster pace – this is where this shoe comes alive.

For me the level of cushioning is present enough across the entire foot to give a comfortable ride while being responsive and with enough ground feel that I felt a strong pull to move.

I should also say that this could be a great road-to-trail running shoe as it doesn’t have more cleat-like, aggressive lugs – which would risk quicker wear of outsole material – and the same get-up-and-go on trails translates well to pavement. This is especially true for dirt roads.

Frankly, this is a shoe that found its way into rotation as an almost daily training shoe (such as anything can be when you do a lot of trail running shoe reviews and have 10+ shoes in the hopper). This is a versatile shoe with a fun and almost bouncy ride which handles fast and slow paces with ease.

At $145 the Asics NOVABLAST 3 TR is a decently priced shoe for something that can handle everything from groomed trails to dirt roads and even a bit of pavement. Would it be better if technical trails were a more complete part of the menu? Of course, but what this shoe does, it does well.

The Blast midsole gives this the spring of firmer midsoles while accommodating those seeking a softer midsole without a loss in performance.

I’m eagerly awaiting the next iteration of this shoe to see if rocky and technical trails become part of its purview. We shall see!

Have you run in the Asics NOVABLAST 3 TR of its road running shoes cousin? Tell us in the comments!