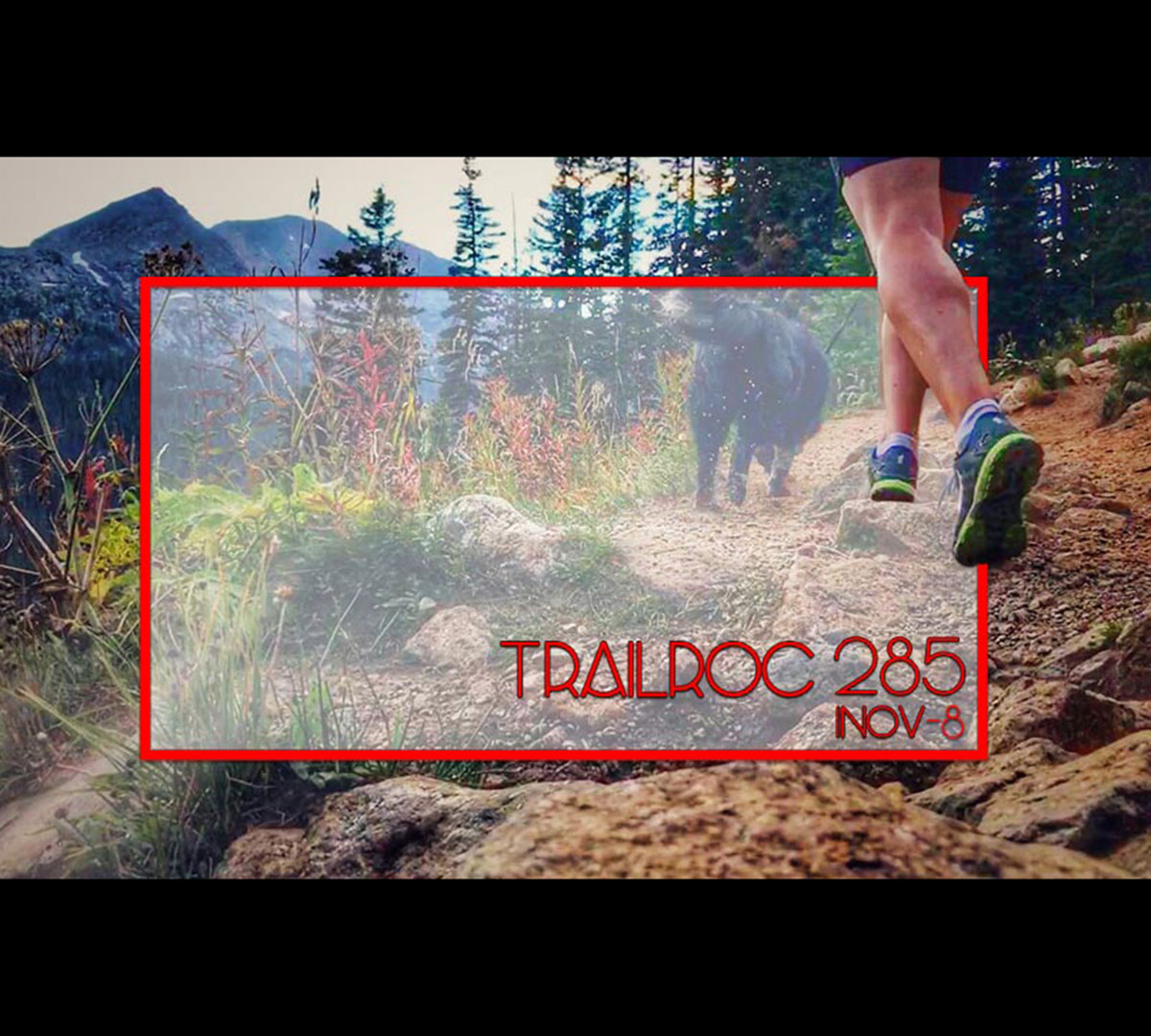 I recently had a conversation with someone from the U.K. who was wearing Inov-8 running shoes. He was under the impression that they hadn’t really made too much inroads into the U.S. market as they had in other parts of the world. However, I assured him, that while they may not have as much volumes as some more widely carried brands, they absolutely have a very dedicated following. With that said, and as odd as it may seem, the shoe I’m taking a look at today will be the first ever Inov-8 product to be reviewed by the Gearist crew. Based out of Crook, County Durham in the U.K. Inov-8 is a company who makes a point of building products that truly keep runners in touch with the ground. Without any further ado, let me introduce you to the Trailroc 285 from Inov-8.

Before I get into anything else, allow me to take a second to give you the skinny on the naming of Inov-8 shoes. Not just a randomly coded number, the “285” in the Trailroc 285 refers to the average weight of all the shoes in a particular model. My men’s size 11 comes in at 11 ounces (310 grams) even. It can be a tad confusing but keeping the formula in mind is a good way to give you an idea of where the weight fits within the Inov-89 lineup. Fun, huh?

The outsole material of the Trailroc 285 is made using Inov-8’s Tri-C sticky rubber which is a system of three different sticky rubbers combined to add traction and durability to the shoe. In the heel, we find the hardest and most durable rubber. Running up the center of the outsole (which you can see by the color variation) we can see the softest rubber on the outsole for additional traction in a typically low-friction area while on the outer edges of the shoe we find a medium-soft rubber.

The lug layout of the outsole is made using what Inov-8 refers to as a series of 4mm-deep “studs” which are spaced so as to not allow a ton of debris to get caught up in the shoe while providing good traction. The lugs are also meant to be so plentiful (86 of them on my size 11’s) so as to provide a softer landing feel in addition to any midsole material.

With the lugs on the Trailroc 285 and the reputation of Inov-8 being so solid I decided to take the shoe on their maiden voyage in a summit attempt of the 14,255 foot tall Long’s Peak in Rocky Mountain National Park. Now I know that this was not necessarily a “run”, per se but I like to push products outside of their general comfort zone and since the Trailroc 285 is made for rocky, hardpack trail I wanted to see how it could do. On top of that, I’d certainly be putting the out-of-the-box comfort to the test since this hike would take over 5 hours.

First, the traction on the Inov-8 Trailroc 285 is excellent. While on my way up Long’s Peak I played a sort of game with myself to see how far I could make it without using my hands. While this isn’t challenging on the trail part of the climb, once you get to the boulder field it becomes VERY difficult to go without hands since you’re climbing up a 45° pile of boulders. On more traditional trails – and then I was actually running –  I found the traction of these similar to some other shoes which opt for a high number of smaller lugs rather than larger, more abstract. While both can be good, I certainly see a lot of value in smaller, more adaptive arrangements. As for durability, I’ve seen very little wear in the outsole material of the shoe and I could easily see the Trailroc 285 going for 400+ miles for me. 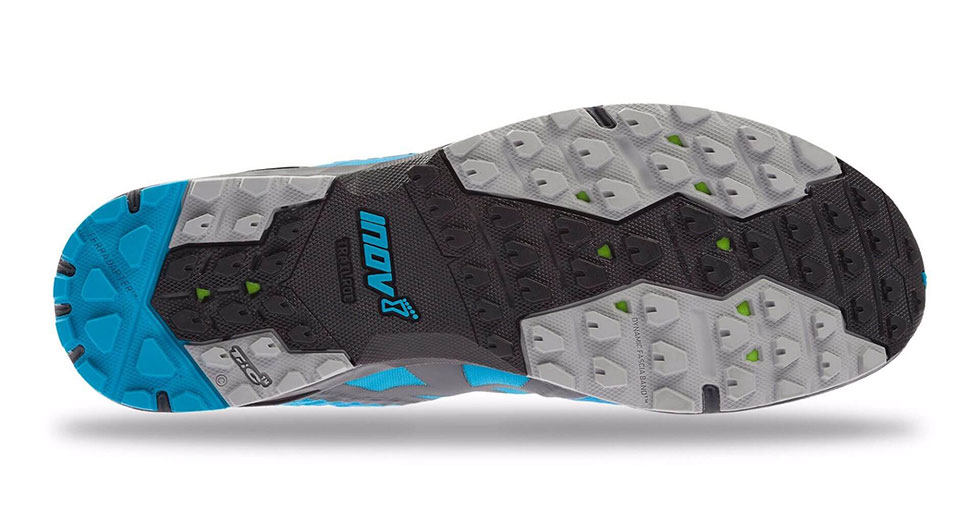 The midsole of the Inov-8 Trailroc 285 is made from the brand’s Powerflow+ material which “delivers 10% better shock absorption and 25% better energy return than standard midsoles” –  I take “standard” to mean traditional EVA foam. Stack heights on the midsole are 21.5mm in the heel and 13.5mm in the forefoot for a net drop of 8mm. Embedded in the midsole is Inov-8’s Dynamic Fascia Band rock plate which, apart from keeping the underside of the foot safe from various pokey things, also flexes with the foot and is meant to give a bit of pop as the foot is on its way off the ground.

If you’ve read my reviews for a while now then you probably know that I’m a fan of lower geometry and more minimal-ish shoes a lot of the time. What’s interesting about the Trailroc 285 is that the shoe’s stack and geometry belie its actual feel and function. First, by looks and by actual stack you’d think that the ride may be a bit too harsh in the way of ground feel but I didn’t notice that at all. In fact, the amount of cushioning relative to the amount of underfoot material is quite impressive. Perhaps it’s the lugs themselves adding some additional cushion or perhaps it’s simply the Powerflow+ material but either way, the ground feel lets you know what’s going on underfoot without being harsh.

On my long hike/scramble up Long’s Peak the midsole held up and delivered some good comfort and while I rarely recommend doing something that long out of the box, these held their own. The rock plate does a good job of protecting the foot without deadening the feel and I think that these are a solid option for those looking for more underfoot protection without a more bulky shoe on their feet. 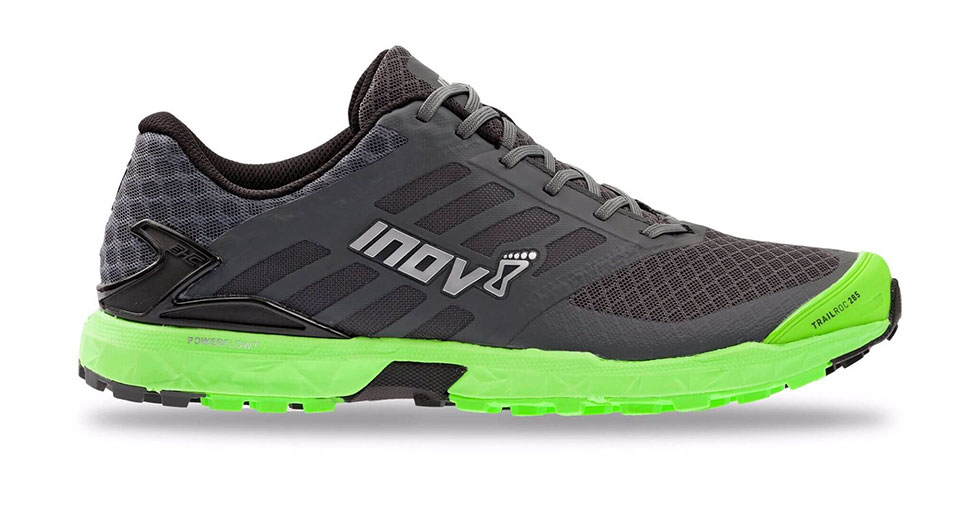 The main body of the upper of the Trailroc 285 is made from a dual-layer mesh which, internally is not seamless, but what seams are there are very smooth and didn’t aggravate my bare feet on the couple of times I took them out for a quick, sockless jog (which I typically don’t do in trail shoes). The support structure on the upper is a bonded overlay which appears as a rand around the front half of the shoe and then blends into the Met-Cradle+ in the midfoot. The Met-Cradle+ is an additional, beefier mesh which appears to overlay the main mesh and connects the midsole all the way up to the laces by way of bonded overlays. In the rear of the shoe, the heel counter has been taken from the inside to the outside of the shoe in an external structure around the heel. Finally, there is a toe cap at the front of the shoe which is limited to just the toes (as opposed to some which may go over the top of the toes and others which may go as far back as the metatarsal heads) and is made from a semi-flexible rubber.

I’ve beaten the hell out of this shoe in the ~55 miles I’ve put on it and in the time the only evidence of any hardship is a small pick in the fabric on the right, pinky toe area – and even then, I had to look super close to find it. The mesh of the Trailroc 285 has held up very well and is breathable to-boot although in the midfoot where the Met-Cradle+ appears the extra layer of mesh does limit the breathability a bit. The toe cap does a good job when those as clumsy as me may find themselves trying to punt rocks but I would not be opposed to seeing it be a bit larger (which would, of course, add weight) to protect a bit on top of the toes and a bit further back but it’s not a deal-breaker.

The security of the upper has been generally quite good for me though I did have to pause during a few outings to tighten up my laces after things heated up just for the added security of fit. The tongue is gusseted and does a nice job of keeping out debris as does the mesh itself, excepting super-fine dust. As for the external heel counter, it doesn’t feel any different to me if I’mn being honest but I suppose if you have sensitivity in that area of your foot it could be a good change of pace. 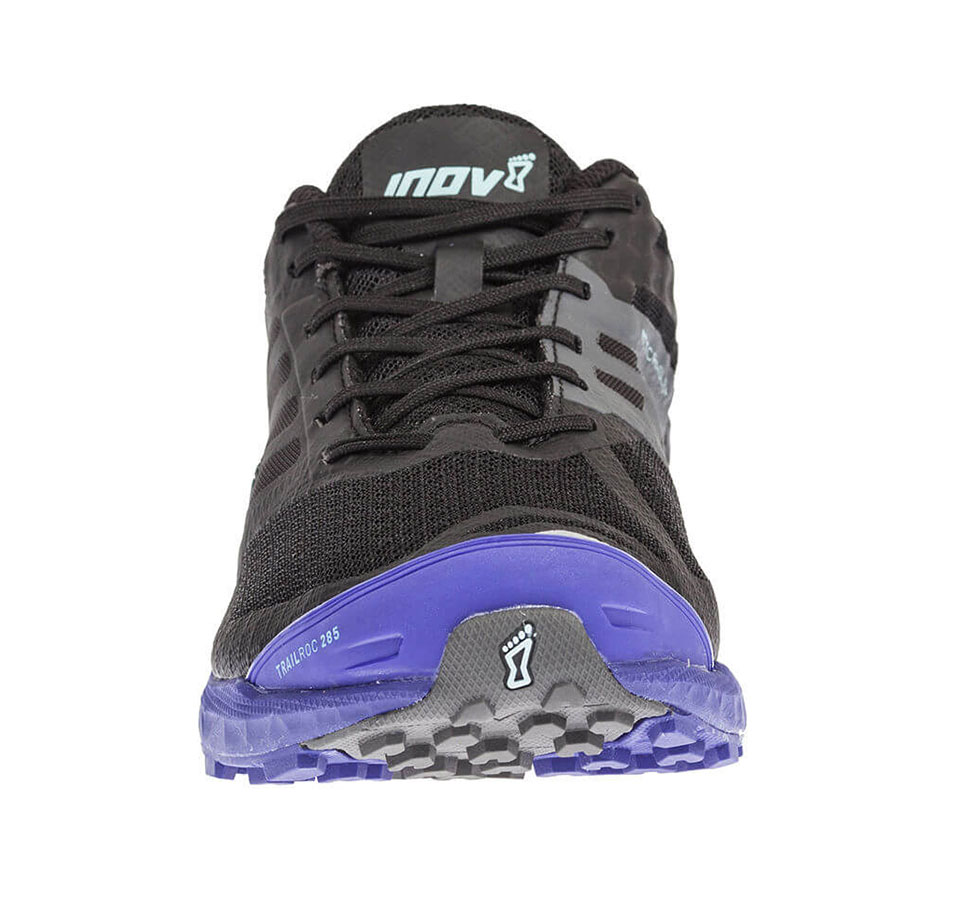 This being my first time in a pair of Inov-8 shoes and having seen so much positive reception of them in the past, I was very curious as to whether the fit would live up to what people had said since many of them were European and, as we know, Euro sizing and fit can be a bit different from American standards. Well, in terms of fit, I’m happy to report that the sizing runs true to U.S. sizing. As for fit, the toe box is good but not overly roomy. In the midfoot, the Met-Cradle+ does a nice job of keeping things in place, although this is the spot where I found myself having to snug down the laces after getting warmed up. For me, the heel was probably one of my favorite spots. While, as I mentioned above I didn’t notice much of a difference with the external heel counter, I did find the fit and heel lockdown in that area to be really nice and secure. while the Inov-8 Trailroc 285 doesn’t come in a wide model, I do think that those with slightly wider-than-average feet could find enough play in the laces to accommodate their feet.

If you’ve got wide-ish feet and have experience with this shoe, please let us know in the comments! 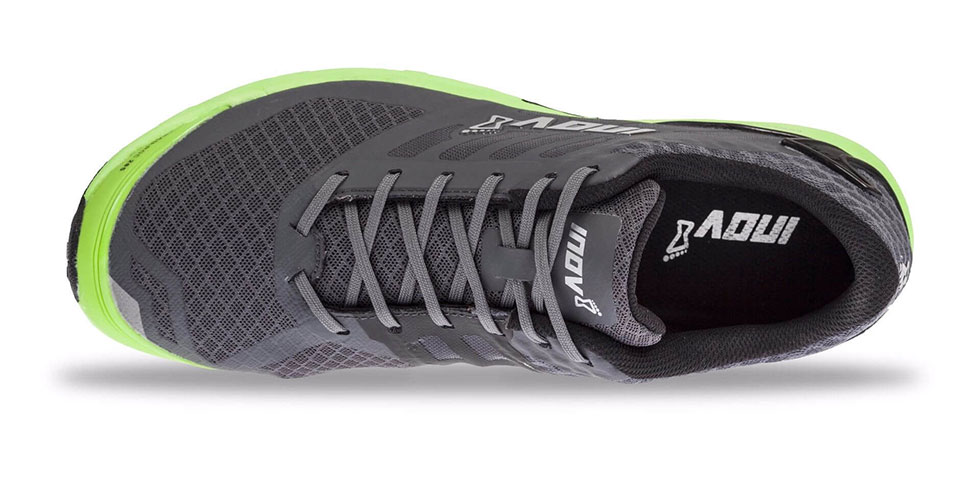 The Inov-8 Trailroc 285 is one of those shoes which I’d group in with some of my favorites from Topo Athletic. The reason I say this is that there is a sense of simplicity in the ride of this shoe which doesn’t feel like it’s trying to do too much – it just kind of is. I know I’m using some kind of intangible ideas there but I think that something like this which gets out of the way and works with you rather than trying to control the way you move is something well worth trying.

The Trailroc 285 has good ground feel while at the same time giving a good amount of cushioning. I would say that if you’re looking for a larger, more beefy shoe – whether that’s for real or just placebo purposes – this probably isn’t going to be a shoe for you. The amount of comfort over longer miles combined with the very good traction is something that makes this a shoe good for some pretty technical terrain. Is it going to have the same grip in looser terrain as something with deeper lugs? No. However, as a shoe that can handle technical hardpack and more general trails, this shoe excels. 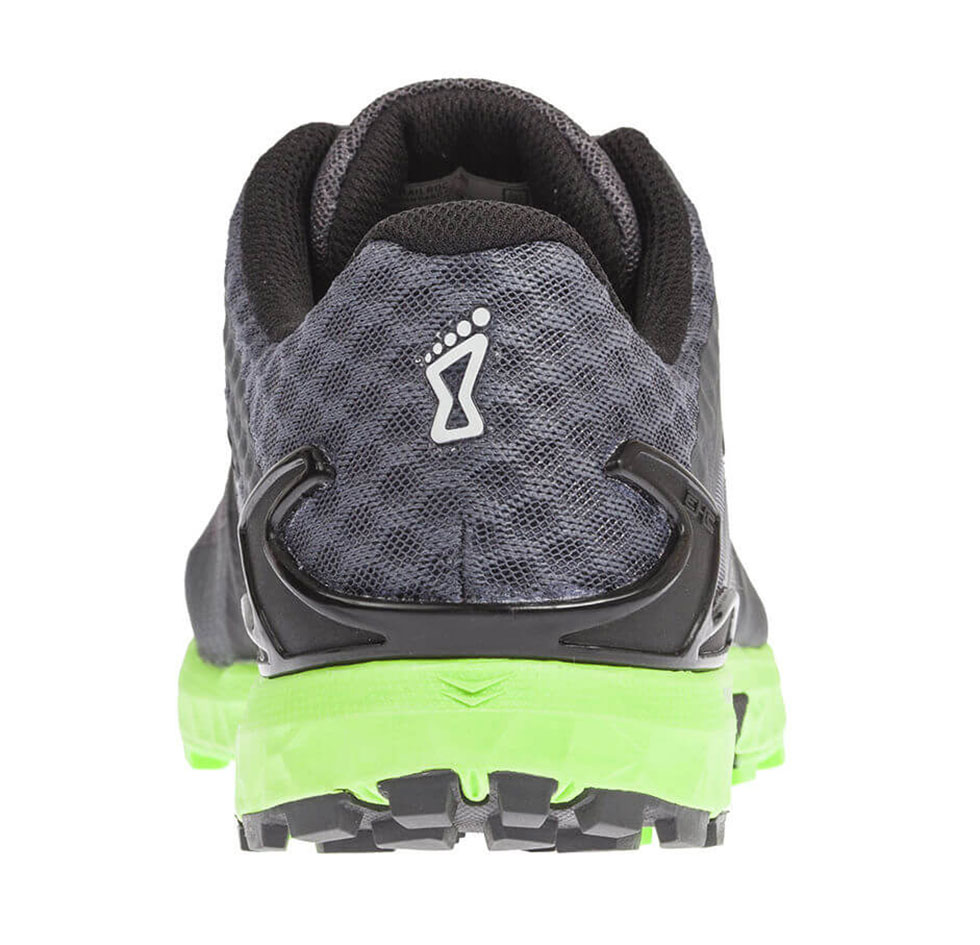 So now we come to the price of the Inov-8 Trailroc 285 which comes in at $150 (PLEASE CHECK THE LINKS BELOW FOR DIFFERENT PRICING). This is a bit steep in my opinion. With that said, I do think this shoe offers a lot but I think that the feel of simplicity in function may leave some people wondering about the validation of the price. I’m not saying it’s not worth it, I just think that it’s a shoe that may turn off some with the price and I think that many of that same number may actually love the shoe if they just had the chance – at a lower price point – to try it out.

This is a good shoe and I’ve really enjoyed my first time in a pair of Inov-8 running shoes. I’m definitely looking forward to seeing how this, and other shoes in the brand’s lineup evolve and get even more visibility in the U.S. market.

Do you run in Inov-8 running shoes? Tell us about your experiences in the comments!