With hiking boots there is a tendency for the feel to become stiff as the boot gets beefier. As a boot ventures out of the groomed trail hiking class and into more of a trekking terrain, this can become even more true since the protection provided for the feet necessarily ramps up. We were quite surprised then when the Thunder III GTX from La Sportiva found its way to Gearist HQ and it brought along with it superior protection but with the touch of a much lighter weight boot.

In other reviews of La Sportiva footwear we’ve seen their use of the proprietary “Impact Brake System” (I.B.S.). This system arranges the lugs on the outsole of a shoe in such a way as to increase the stopping ability of the shoe by up to 20% – I highlighted this earlier this year in my review of the Bushido trail running shoe. In the Thunder III GTX the I.B.S. is integrated with an outsole that grips exceptionally well with multiple flex grooves that compliment the midsole and aid in ground feel. The material of the outsole is Vibram River so the durability, as one would expect from these companies, is superb.

I mentioned the touch of the Thunder III GTX above and I think that much of the reason that aspect of this boot shines is thanks to its outsole.

Made from a material that is 70% EVA foam and 30% IIR (Isobutylene Isoprene Rubber) – you know how we love our hybrid materials – the midsole of this boot has an embedded shank bumps up the stiffness of the sole unit quite a bit. Now, in saying that you’d think – and I thought this right out of the box with these to be honest – that this stiffness might be too much and would limit the agility of these boots.

However, I felt my confidence in my steps and stability on widely varied terrain increase every time out. The material of the midsole providing the cushion of EVA with the resilience of rubber gave it a springy yet stable feel. While the shoe doesn’t flex much apart from the forefoot, the feeling of flex was surprisingly present and again, the touch of this boot is excellent.

Put simply, the upper of these boots is badass. First, the main part of the body is made from tough, yet flexible nubuck leather which serves to protect the foot, provide the boots with their structure and to reinforce high-wear areas, such as the lacing eyelets. Where the nubuck takes a break, Cordura comes into play. This woven material is durable and quite lightweight and also a great compliment to the Gore-Tex Comfort lining (more on this in a second). 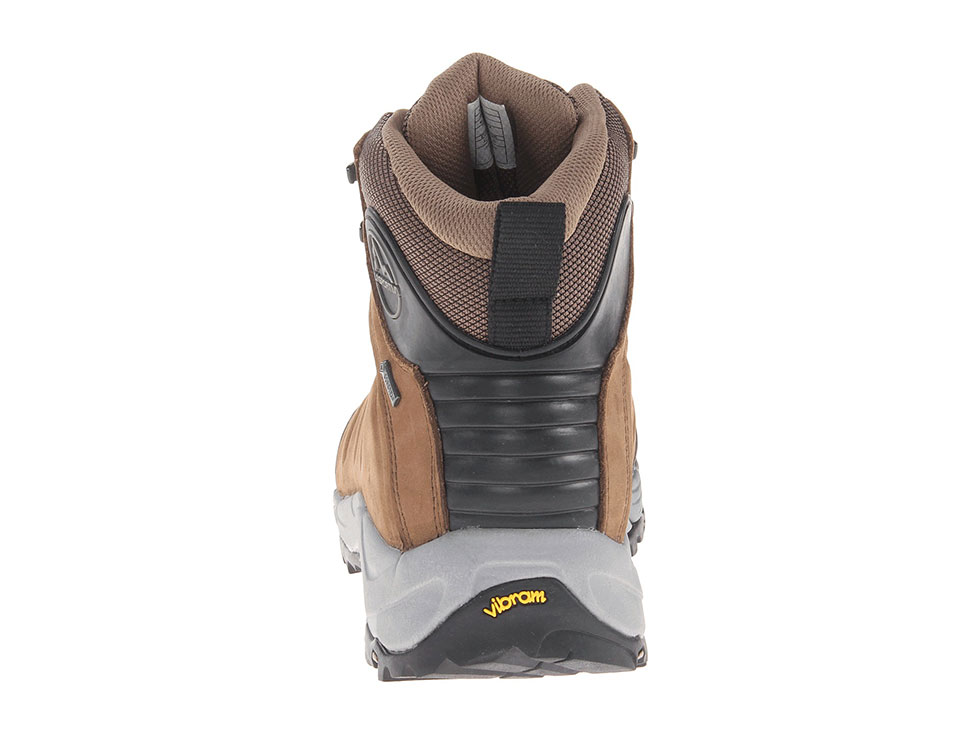 The toe of the Thunder III GTX is probably one of my favorite parts with its super hardcore toe cap that is made with layered and bonded rubber. Up the backside of the shoe, from the midsole up to about ankle height, is a molded rubber heel reinforcement. This little guy added a ton of stability to the rearfoot of these boots and was very evident on particularly tricky and technical descents where the trail was less than friendly – or not a trail at all.

As I mentioned above the interior of the boot is lined with Gore-Tex Comfort. This lining covers the entirety of the inside of the boot and continues across the fully gusseted tongue. I’ve taken these boots through several, quite deliberate, water crossings and they’ve performed well each time. Every now and then, I’ve felt a slight bit of moisture find a way to the foot-side of the tongue but not enough for me to say that my feet were wet. In any event, I think that the construction and waterproof-ness makes this upper capable and versatile in all conditions – especially when combined with some gaiters for over-the-ankle snow.

Sizing in the Thunder III GTX is spot-on. The fit through the heel of the boot is solid when unlaced and becomes more so as you lace it to feel. The midfoot up to the metatarsal heads has a comfortably close fit.

While this may be a bit snug if you have very wide feet, I believe there’s enough play in the lacing and upper to allow for a lot of adjustment as needs be. Also, this close fit brings more stability to in action to the shoe and prevents sliding around internally. As we get to the toe box the close fit of the midfoot goes away and there is a good amount of space for toe wiggle and such.

As with most shoes, I wouldn’t mind seeing a bit more room on the lateral toe box but for toe splay, if I’m being honest, that’s the farthest thing from my mind.

Throughout this review I’ve commented on various aspects of the Thunder III GTX’s performance but I’ll take a second here to put it all in one chunk.

These boots are built to handle some rather gnarly terrain and unlike some boots in that class, La Sportiva has made a point of building a piece that has all the toughness with the feel and agility of a much lighter-duty boot.

There’s a lot of stiffness in the midsole/outsolewhich does a way to aiding stability on uneven ground but that stiffness somehow eases nicely and still lets the foot work. I do think it would be interesting to see how this same exact boot would perform with a bit more flexibility throughout the midsole/outsole. Since so much of the stability is tied into the upper, I think that could be an even more versatile offering.

When you buy a boot that costs $185 you expect a lot and La Sportiva has gone above and beyond with the features of the Thunder III GTX. This boot is versatile enough to handle day hikes and month-long treks over well-groomed trails and no trails at all. Traction is superb on any terrain and while they do rock the stiff midsole, the construction of that part of the boot makes it responsive and natural feeling.