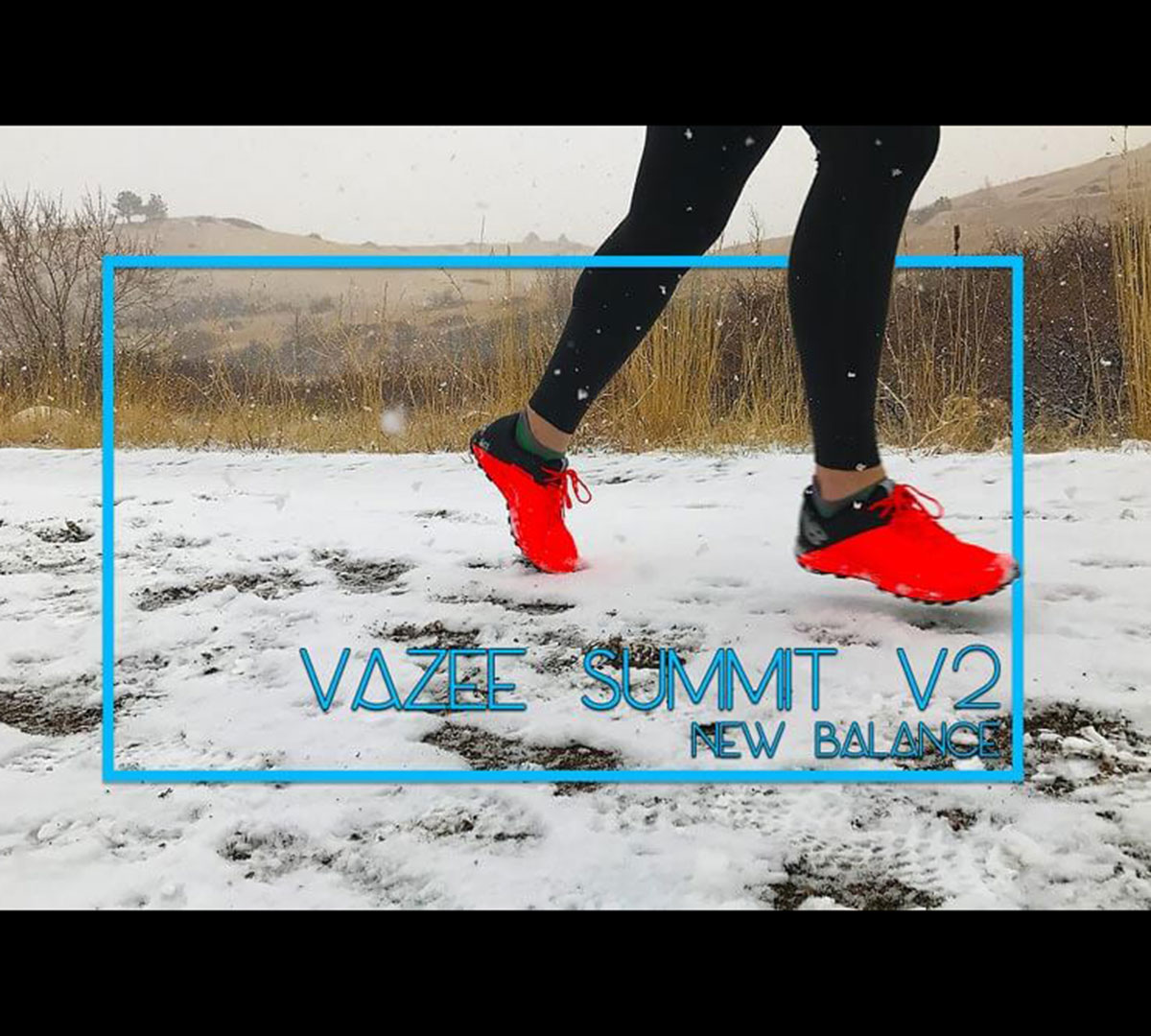 Until recently there’s been a bit of a drought on Gearist when it comes to New Balance. With our run category manager, Lori reviewing the Fresh Foam Hierro V2 [REVIEW HERE] we’ve gotten back in touch with our Boston-based friends and boy are we glad to have done so.

Today, I’m going to be diving into the second version of a shoe whose first iteration I did not have the opportunity to try; the New Balance Vazee Summit Trail V2. The Vazee line was a huge favorite of mine with the Vazee Pace and so I was very excited to see if the racer feel of that shoe could make its was effectively off-road. Let’s get to it!

The outsole of the New balance Vazee Summit Trail V2 remains unchanged from version one. However, since I didn’t review version one, let’s look at it a bit more closely. The rubber use on the outsole of this shoe is NB’s Hydrohesion compound. This material is made to stick in wet or dry conditions without sacrificing durability. The ~4mm deep lugs of the outsole are arranged in a series of alternating-direction rows which are not directionally oriented – in other words, lugs in the front and in the back face both directions. While I would consider the outsole to be full-contact, there are no lugs under the midfoot.

The last pair of New Balance trail running shoes I reviewed was the Fresh Foam Gobi [REVIEW HERE]. Those shoes were basically a trail-adapted version of the Fresh Foam Zante V2 and while I enjoyed the ride just as I had with the Zante(s), the traction and protection of the FF Gobi left a lot to be desired for me. However, the Vazee Summit V2 steps it up in a big way. First, I’ve had this shoe on snowy, muddy and dry trails in and around Gearist HQ here in Colorado. On dry trails the traction was excellent on a wide variety of terrain that included scree, groomed trail and larger, flatter rocks which can sometimes find weakness in less-than-sticky rubber. On muddy trails there were times I could have used a deeper lug if I’m being picky but to be honest, these did very well. The same goes for snowy trail where I found myself running over hidden rocks where the stickiness of the Hydrohesion rubber stood out.

While not the most aggressively lugged shoe in the world, the Vazee Summit Trail V2 is a great choice for a shoe that can handle a wide breadth of trail types – from groomed to technical. Durability has also been quite impressive (another issue I had with the Fresh Foam Gobi) and with ~35 miles on this shoe, I only see real wear on the lugs of the lateral forefoot and then, not much.

When I review running shoes I do my best to keep my thoughts mostly subjective and leave other shoes out of the mix. In this case however, right out of the box I was reminded of the Salomon Sense Ultra first by the aesthetics and second by the feel and action of the midsole. I’ll get into this more in the RIDE section below so for now we’ll focus on the build and details of the midsole of the New Balance Vazee Summit Trail V2 by itself.

The midsole of the Vazee Summit V2 is made from New Balance’s REVlite foam offering cushioning but with a firm feel and response. Under the front 3/4 of the shoe is embedded a Lockstep rock plate (visible beneath the midsole rubber cutaways). The stack in the rear foot is 27mm and in the forefoot it is 17mm for a net drop of 10mm.

First I should say that the 10mm stack height on paper is misleading in practice. What I mean by this is that the shoe doesn’t feel to me as though it has so much offset – which I like. The cushioning provided by the REVlite foam is one that allows for excellent ground feel and despite having a relatively low overall stack, the Lockstep plate provides excellent protection underfoot when it’s called for. 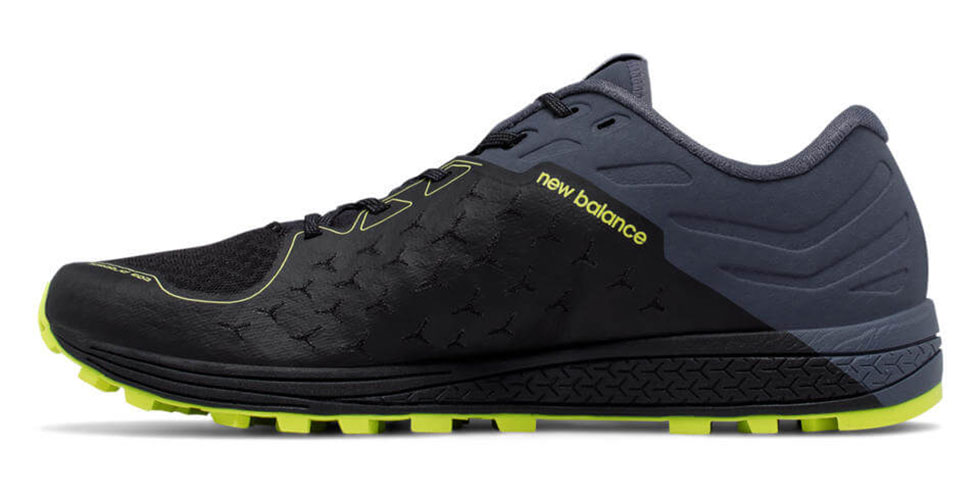 The upper of the New Balance Vazee Summit V2 is where the design changes from version one really show up (reminder, I did not use V1). The body of the upper is made using NB’s Fantom Fit technology which seamlessly bonds two pieces of lightweight mesh. This mesh is largely covered with a bonded overlay with the only truly open area being the vamp (the space on top of the toes) and around the toes it is reinforced to form the Toe Protect cap. This is a rather large departure from version one which had much more open mesh with more traditional, spaced overlays. The middle half of the bonding has cutaways that are small but plentiful in what our run category manager Lori calls “turkey footprints” (see image). Despite the more closed-off upper mesh the breathability seems reasonably good. To be fair I haven’t put any 80°+ miles in them but I have no reason to believe that I’d feel overheated.

Underlying this seamless upper is a construction which, once again, hearkens to Salomon and their Endofit system. In this case it’s an internal bootie construction (which doesn’t seem to have a name that I can find). This lightweight, stretchy mesh encircles the midfoot, forming the tongue and connecting to the top of the vamp. While it does indeed keep some debris out of the way, since the tongue isn’t truly gusseted finer debris will get in after a while.

The heel cup, while well-formed, is rather flexible for a trail shoe but to see functions extremely well and maintains some of the semi-ness of the heel cup of road models in the Vazee line. The Foam around the collar and on the tongue is a perfect amount, in my opinion – not overly stuffed and just enough to provide comfort on long runs. The laces on the Vazee Summit 2 are a sort of hybrid between a sort helix and tradition sausage-link laces. In any event, they stayed put on some rather gnarly runs.

For me the upper of this shoe is very solid and shows no signs of wear other than being a bit dirty (but aren’t trail shoes supposed to get dirty?). The feel of this spills seamlessly into the light-and-fast feel of the rest of the shoe and is one more part that I feel makes this shoe want to go. 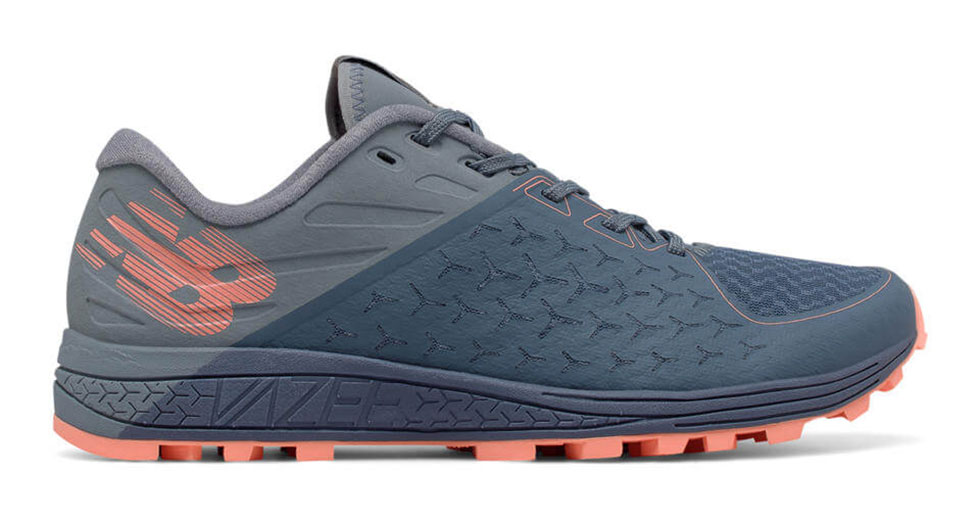 This is another spot where the Vazee Summit Trail V2 feels very similar to the Salomon Sense Ultra to me. The internal bootie construction of this shoe gently hugs the foot without feeling confining or tight. The rear of the shoe locked down my heel nicely with no real slipping, even on steeper terrain. Lori mentioned that, for her, the collar just behind the uppermost eyelets came up a little too high on the front of her ankle and while I didn’t notice this myself, it’s worth pointing out. The forefoot is a good width though not super spacious which again, points to a more racer-esque feel. The toe box is good but could easily use some additional room on the lateral side.

As I’ve mentioned above, this shoe definitely has a racer feel and the fit is the first place you’ll notice the cohesive nature of this coming up from the sole unit and tying nicely into the upper and fit.

Up to now you’ve probably figured out that I like this shoe. This is true. However, the ride is where I really believe the Vazee Summit Trail V2 shines. As I mentioned in the midsole section above, the ground feel of this shoe is excellent. It manages to pull off being perceptive without being harsh. It’s adept at longer, slower miles while still chomping at the bit to rip of blistering descents without a second thought.

If you fancy yourself as someone who want’s more cushion in a trail shoe then you probably will want something different that can give you that. For me though (not that I’m writing off more cushion), this shoe brings a lot to the table in a sleek and zippy package (which is also pretty light for a trail shoe with the men’s size 9 coming in at 9.1 ounces and the women’s size 8 at 8.0 ounces).

I’ve sprinkled a few comparisons of the New Balance Vazee Summit Trail V2 to the Salomon Sense Ultra in this review because I think that they’re both amazing shoes that can rip up trails. Now, however, I’ll point out something that sets them apart in a huge way and that is the price. The Vazee Summit 2 comes in at $100. That’s it. I mean, I’ve recently mentioned seeing an over uptick in running shoe prices but this seems to have proved me (happily) wrong. This price is excellent and you should buy this shoe if you think it fits your style at all (and please us our links below to do it while supporting Gearist!).

I am thoroughly impressed with the New Balance Vazee Summit Trail V2 and while I may have been so with version one as well, I’m more than happy to have gotten my feet into this one.