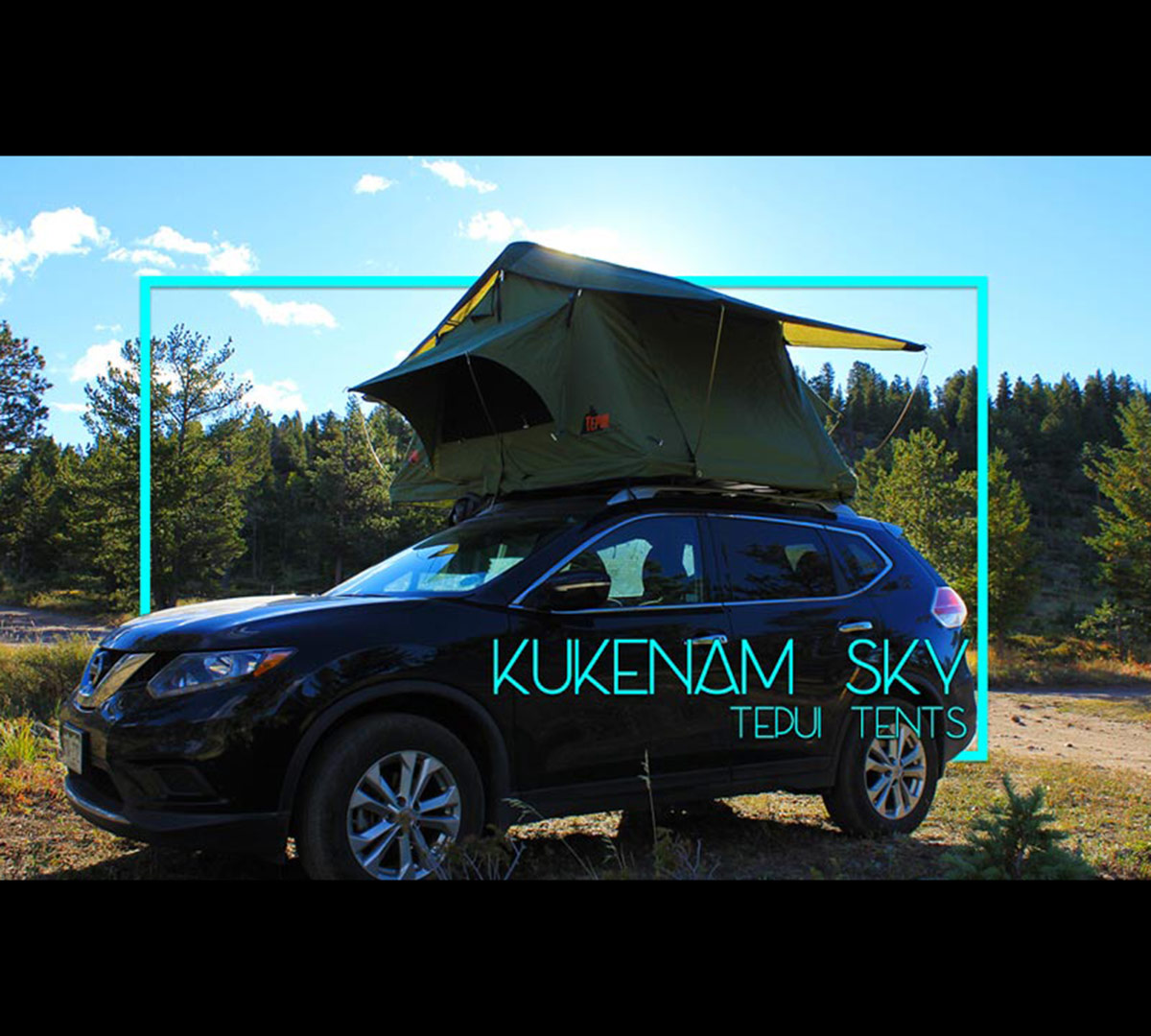 As I was setting up the tent I was definitely getting some strange looks. First rolling back the cover of the “box” on top of my car and them extending a rather long ladder. The best part however, was seeing the realization of what I was setting up dawn on people’s faces as I folded open the “box” to reveal a fully-pitched tent sitting in all its glory atop my 2015 Nissan Rogue.

Before I get into too many of the features and how-to’s about this tent, the Kukenam Sky from Tepui Tents, I want to take a second to look at how it’s built. The body of the tent is made from a burly 260g polyester cotton; 600D ripstop fabric with waterproof ventilate coating which is also UV and mold resistant. Windows, which abound in this model, are also where the “Sky” are a set of one large window on each side of the tent and one on each side of its A-frame roof. Each of these windows is lined with a un-zippable no-see-um mesh to keep out things that fly but still let in tons of light and air. The sleeping surface isn’t just a hard base waiting for you to lay down your own sleeping pad, rather, it’s a 2.5 in thick, high-density foam mattress which, SPOILER  ALERT, is amazing.

The frame of the Kukenam Sky is made from 5/8″ aluminum tube and makes for a sturdy and always-pitched setup (which I’ll talk more about later). Holding up all of this is an aluminum base with and insulate fiberglass sheet which makes this Tepui model a viable, four-season option. Pre-installed on the tent is a 420D polyester oxford, PU coated rainfly which is very easy to remove and also provides awnings over each of the main, side windows.

The final two pieces of the Tepui Kukenam Sky puzzle from a construction standpoint are the ladder strapped to the top of the box (when folded) and the travel cover. The telescoping aluminum ladder is capable of extending to 8.5 feet so whether it’s on my, relatively shortish car or on a much taller vehicle, you should have no problems reaching the ground. The travel cover is made from a super tough, 1000g  PVC which covers the entire box and the collapsed ladder.

The fabric of the Tepui Kukenam Sky impressed me a lot. It’s very durable and while it’s just a susceptible to bumps and bruises as any other tent would be, the feeling of the fabric in-hand gave me a lot of confidence in it. In wind and rain the construction – both in the sense of the frame and the material – held like a beast.

Setting up the Kukenam Sky tent may require a bit of standing on tires, bumpers and such a bit but, in general, setting this thing up is a breeze and takes a very quick 10minutes. Here are the steps (and some images/video below):

That’s it. Now, you may be asking yourself, “Why doesn’t the side of the tent NOT on top of the car collapse under the weight of the occupants?” This is because the ladder is load-bearing and creates the support for the unsupported side of the tent. Never once did I ever feel anything wonky about this, even with more than one person with their weight (and gear) on it.

Breaking down the tent is a bit more time-consuming but not by much. The reason for this is because the fabric of the tent tends to puff outward and needs to be tucked in between the halve of the tent to be out of the way of any zippers and fit properly under the travel cover. Tepee does account for this somewhat by using an optional elastic strap which can be attached internal which pulls the fabric inward as the tent is collapsed.

As far as camping in the Tepui Kukenam Sky, I was very impressed with the sturdiness. As I’ve mentioned above, I was in some nasty winds with rain and hail and nothing ever budged. At several points, the wind was even enough to shake the entire car but the tent stayed put no matter what.

One of the things I was most curious about was how Tepui Tents would travel. Sitting on top of the car in the closed position, the Kukenam Sky basically amounts to a 12 inch high (56″ X 48″) box with flat sides that weighs 130 lbs. On the highway and general roads I didn’t notice anything in the way of feeling top-heavy. Even on trails which can barely be called “roads” at all such as the Switzerland Trail I mentioned earlier, the tent sits close enough to the roof of the car that I didn’t notice any funny handling to speak of. 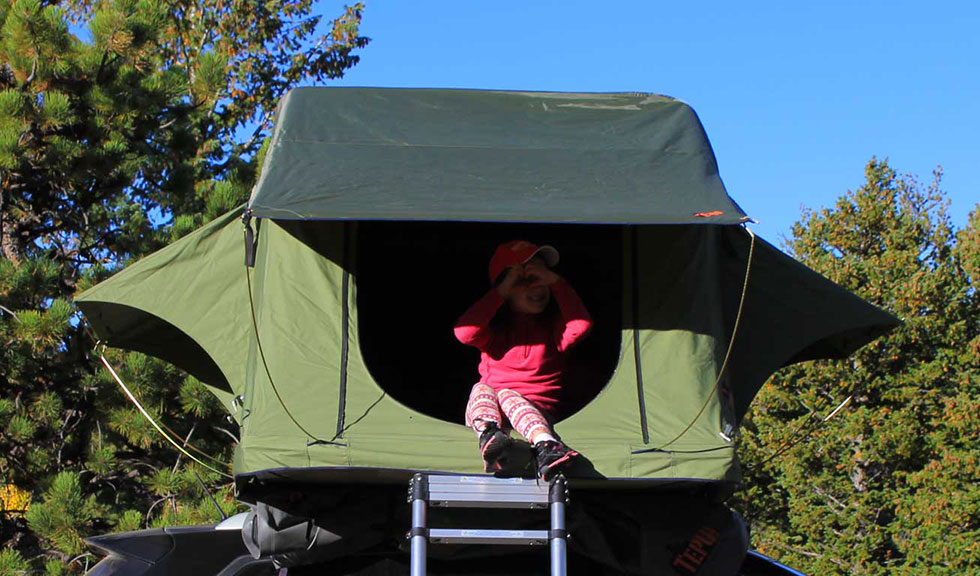 Where I did notice a difference is gas mileage. On the highway my car with generally get around 27 mpg. While taking the Tepui on a longer road trip (all the way from Colorado to Illinois and back) my mileage sank to a not-so-great 19.5 mpg. This could be a deal breaker for some people. I’m certainly no engineer but it seems to me that there could be a few relatively easy ways to at least partially address this. First, I’d like to see if some sort of a frontside fairing would make a difference. Granted, it would have to have the proper clearance and angle but it would certainly cut the wind a but. Second, I’d be curious to see what a sort of collapsable shell could do to address mileage. This could be made out of fairly lightweight materials and easily fold off the tent or be stowed in the vehicle when not in use. Either way, the mileage increase certainly did not go unnoticed by me.

Something else to consider with a rooftop tent is that if you’re on an extended camping trip in one place, you can’t drive with the tent pitched and you also can’t leave it behind to drive somewhere. This means that each time you need to drive, you have to pack it away. Fortunately, this only takes a few minutes but it does mean that any gear stored in the tent will need to be put into your vehicle.

As far as comfort goes, the Tepui tent is unmatched for sleeping. The pad in the bottom of the tent is one big-ass piece of soft foam with no rocks or sticks to worry about at night. There’s also no worry about rolling off of your sleeping pad or being restricted by being strapped to it. 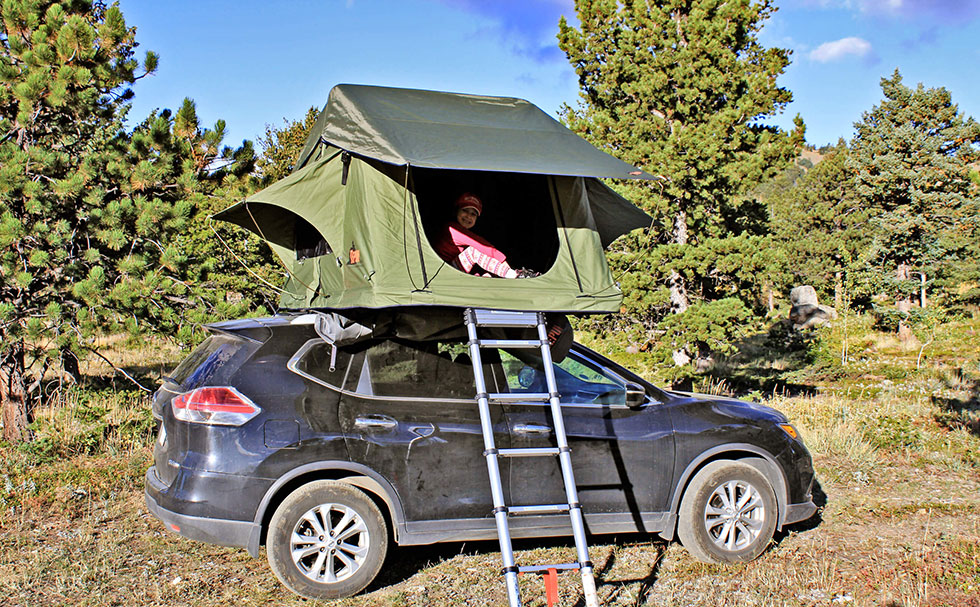 Ok the price tag: Tepui tents do not come cheap with their cheapest model at $925 and going all the way up to $2395. The Kukenam Sky tent comes in somewhere in the middle with a cost of $1350. This is quite up there but I’ve gotta say that if you do a lot of camping and don’t want to sacrifice comfort (especially if the gas mileage issue can be brought under some control) this is well worth the price. Not only are you up and off the ground, but you’re able to pull back the flaps over the skylights and sleep literally under the stars.