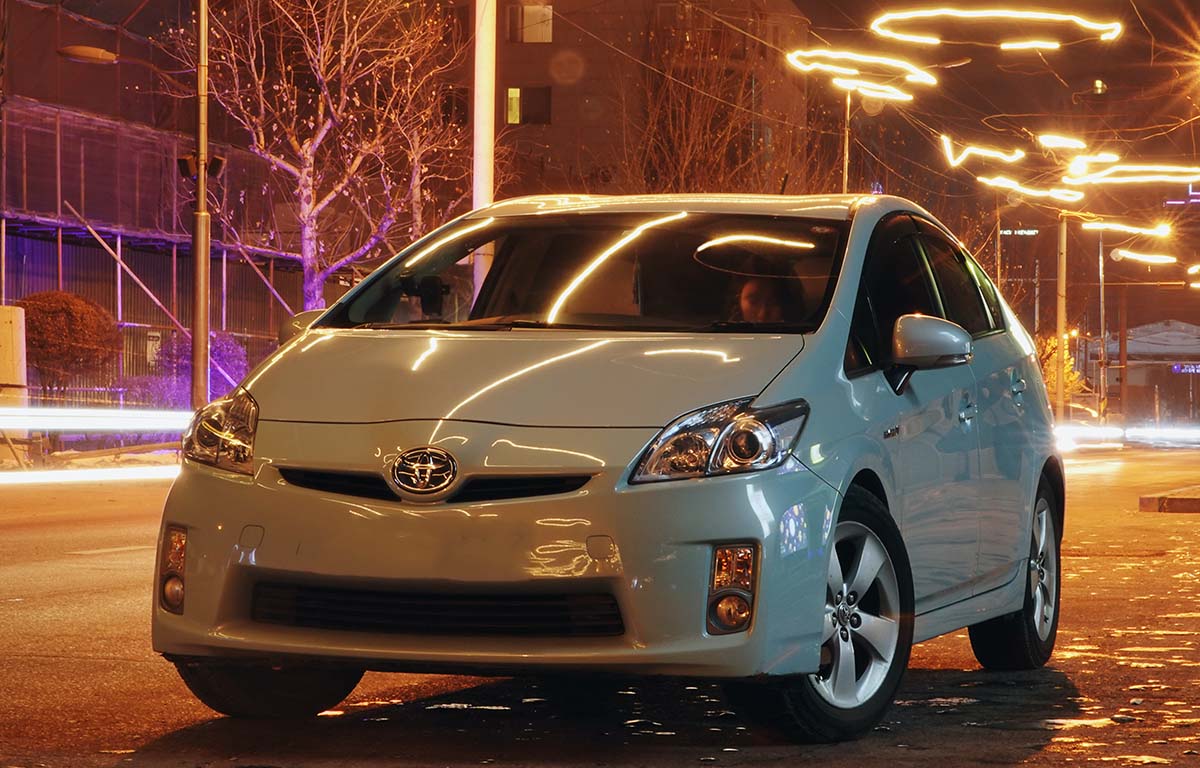 If it hasn’t happened to you, be aware: it’s not just media hype. The Highway Loss Data Institute (HLDI) has recently published a report that indicates a 40x increase of insurance claims in a 4 year period for the 2004-2009 Toyota Prius. 40 times increase!

I’ve heard about it, but until my catalytic converter got stolen I never thought I’d worry about it.

What is a Prius Catalytic Converter?

A catalytic converter is part of your Prius exhaust system. It’s function is to convert raw exhaust from your engine into cleaner emissions coming out of your tailpipe and into the environment.

Your catalytic converter works by heating up metal catalysts to 500-1200 degrees Fahrenheit, causing a chemical reaction to convert that harmful engine exhaust to clean tailpipe emissions.

Where is the Catalytic Converter on my Prius?

Here’s a helpful summary of your Prius exhaust system and the major components, starting at the front of the car and working towards the rear: Engine > Manifold > Catalytic Converter > Resonator > Muffler > Tailpipe. These components are connected by series of pipes, about 2″ around.

The catalytic converter on your Prius is underneath your car and runs down the center of your car, starting around your front wheels and ending about midway through the length of the car.

The first cat peeks out at an angle from the engine area, and the second is in plain view, right about where the back of your front seats are.

Why are Prius catalytic converters being stolen?

Other popular vehicles on the most stolen list are the Honda Element, Toyota Tacoma & Tundra pickup trucks and Honda Accords.

As you read above, the exhaust uses metal catalysts in the cat converter and are a combination of platinum, rhodium, palladium and other precious metals.

Although a catalytic converter only contains a few grams of these metals, it can add up. At the time of this writing, Palladium is around $2000 per ounce and Rhodium is at almost $12,000 per ounce.

It can cost upwards of $4,000 dollars to replace your Prius catalytic converter.

There are theories out there about why the Prius is a big target for Catalytic converter theft.

One theory is that because the gas engine doesn’t work as much, the precious metals don’t wear out as much (I don’t buy this one).

The second, and most likely, is that because the Prius doesn’t rely on the gas engine full time, the catalytic converter may not get hot enough all the time to run efficiently. As a result, more of the precious metals are needed to make up for this lack of efficiency.

The bottom line: A Prius catalytic converter can be stolen in less than a minute and it’s more valuable than most other vehicles.

How can I tell if my Prius catalytic converter has been stolen?

This is an easy one. You’ll know it as soon as you start your Prius. You’ll hear a loud grumbling noise from underneath your car. A very loud grumble. Some people think their Prius muffler has been stolen, but that’s not the case.

With your cat converter gone, the muffler doesn’t get to do it’s job of, well, muffling the engine sounds.

Along with the noise, the check engine light (CEL) on your dash will light up as well.

If you look underneath your car where the catalytic converter should be, you’ll see big, empty space.

Can I drive my Prius without a catalytic converter?

In general, it’s not a good idea to drive ANY vehicle without a catalytic converter for any amount of time. It’s not good for your car over the long term and bad for the environment. Not to mention incredibly noisy and against the law.

If you need to drive for a short time, it may be ok to drive without a catalytic converter.

But let’s go back to your Prius. So, your Prius catalytic converter was stolen and you’re wondering if it’s ok to drive to the garage to get it fixed. The answer is….

The Prius comes in different “generations” depending on your model year.

If you have a 1st or 2nd Gen, you’ll be ok driving your Prius to the dealer or Mechanic to get this mess taken care of.

The noise may be embarassing, but as long as there’s nothing hanging down from the bottom of your car, you should be ok.

If you have a 3rd Gen or newer Prius, DO NOT DRIVE IT if your catalytic converter has been stolen!

Driving your 2010+ Prius with those lines cut may do serious damage to your engine.

Whichever generation of Prius you drive, call a tow truck if you can’t identify your model year or the amount of damage done.

You can check out this earlier article that covers all the bases and the devices on the the market today.

The quick story is that thieves are stealing cat converters for two main reasons: It’s easy to do and it pays well. In less than a minute, your catalytic converter can be stolen.

As a Prius owner, the best protection is to make it as difficult as possible to steal your catalytic converter by installing a physical anti-theft device.

Do cat shields really work? Is a cat lock worth it? Given enough time and the right situation, any anti-theft device can be defeated. By installing a visual anti-theft device, a would-be thief may move on to an easier target.

That’s the best you can hope for. 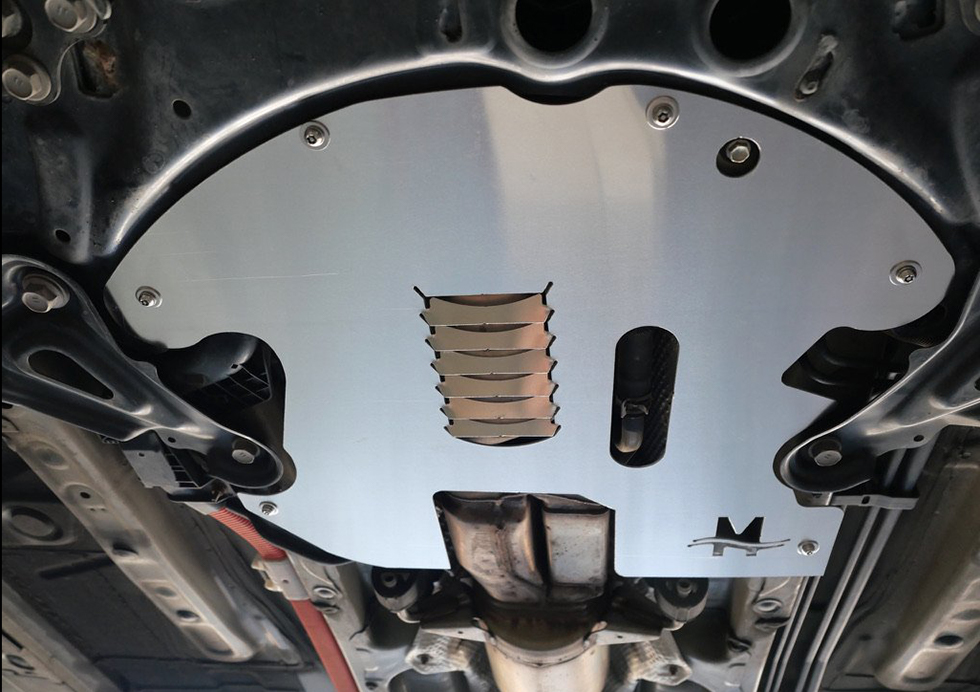 This is what a Catalytic Converter shield looks like installed on a Prius. It’s one of the most effective ways to deter catalytic converter theft

When I was looking for Prius Cat Shields, i noticed some outstanding features on the MiilerCat that set them apart from less effective competitors.

Designed for a custom fit, easy installation and clear instructions for your specific model Prius. If you’re comfortable safely changing your oil and working under your car, install can be a DIY job with a few simple tools.

If you’re unsure about working on your car, MillerCat has an installer network, and some are even Toyota Dealers.

Thermal Testing. This was the big highlight for me. A catalytic converter does its job by using heat. A lot of heat. But too much heat can damage your catalytic converter. If you put a some kind of cover on it, that heat has nowhere to go.

MillerCAT products go through rounds of testing and design to make sure your Prius cat stays safe.

Security hardware options. MillerCat provides security bolts with an uncommon head that can’t be removed by common tools. As an option, they take it one step further by offering a proprietary custom screw that they have developed. with either option, they include the necessary tool in case your Cat Sheild needs to be removed to service your Prius.

MillerCAT is US company with excellent support. Cat Shields are designed and manufacutured in house. Although excellently designed, this isn’t a complicated piece of machinery. Once it’s on your Prius, you’ll probably never have to worry about it again. But things happen. Damage in shipping, maybe questions about install. In any case, if you have a question, there’s a real live person on the on the other side.

Extra bonus: At the time of writing MillerCat is offering free shipping in the continental US and most orders ship same or next day! Expedited shipping is available.

UPDATE: MillerCat heard about us and has offered us a discount code for our readers. Order your CatShield direct and use Discount Code : GEARIST

A two piece shield offering the most protection for your Gen 1 Toyota Prius. Available in Aluminum with the Option for the custom high security screw kit.

Not sure that a do it yourself install is for you? Take a look at the instructions to see what you’re getting into.

The Gen 2 plate is available in both Aluminum or Stainless Steel with the option for the high security screw kit.

Check out the install instructions here

Like the Gen 2 plate above, the Gen 3 is available in aluminum or stainless steel and the option for a high security hardware kit.

If you’re thinking about a DIY install to protect your catalytic converter, see whats involved and see the install instructions here.

The Gen 4 is designed for both the Prius Liftback and Prius Prime models.

Available in Aluminum or stainless steel. with the option for the MillerCAT high security hardware.

This model is an easy install, with no drilling involved. See the install instructions here,

So If you’re looking for a quick recommendation for a Prius specific device, check out the CatShield from MillerCat.

It’s a “best in class” shield made specifically for your Prius. They’ve got competitive pricing on the low end, and additional options to insure that your Prius is as safe as it can be.

No matter what you do, it’s important to protect your Prius catalytic converter from theft. Replacement costs are high, not to mention the inconvenience. So if you’re looking to see what you can do to prevent theft, read this earlier article that covers some catalytic converter anti theft strategies!