I’ve always been a fan of looking at products through the lens of time, particularly as it relates to their predecessors. I get to see the evolution of their industry and watch as the bar is pushed higher and higher. When Massachusetts-based Bern Unlimited first launched the Baker helmet, they were the pioneers of the helmet visor. However, the Baker lacked any venting which is where it’s close sibling, the Bern Watts helmet comes in.

The outer shell of the Bern Watt helmet is made from Acrylonitrile Butadiene Styrene (ABS) polymer. This shell is structurally sound and strong enough that it’s able to be built as a relatively thin layer, thus keeping the weight down. Under the thin, ABS shell is EPS hard foam, which again, has a structure that makes it safe enough to be applied in a relatively thin layer (the EPS meets ASTM F 2040 and EN 1077B standards for snow and ski, CPSC and EN 1078 standards for bike and skate). 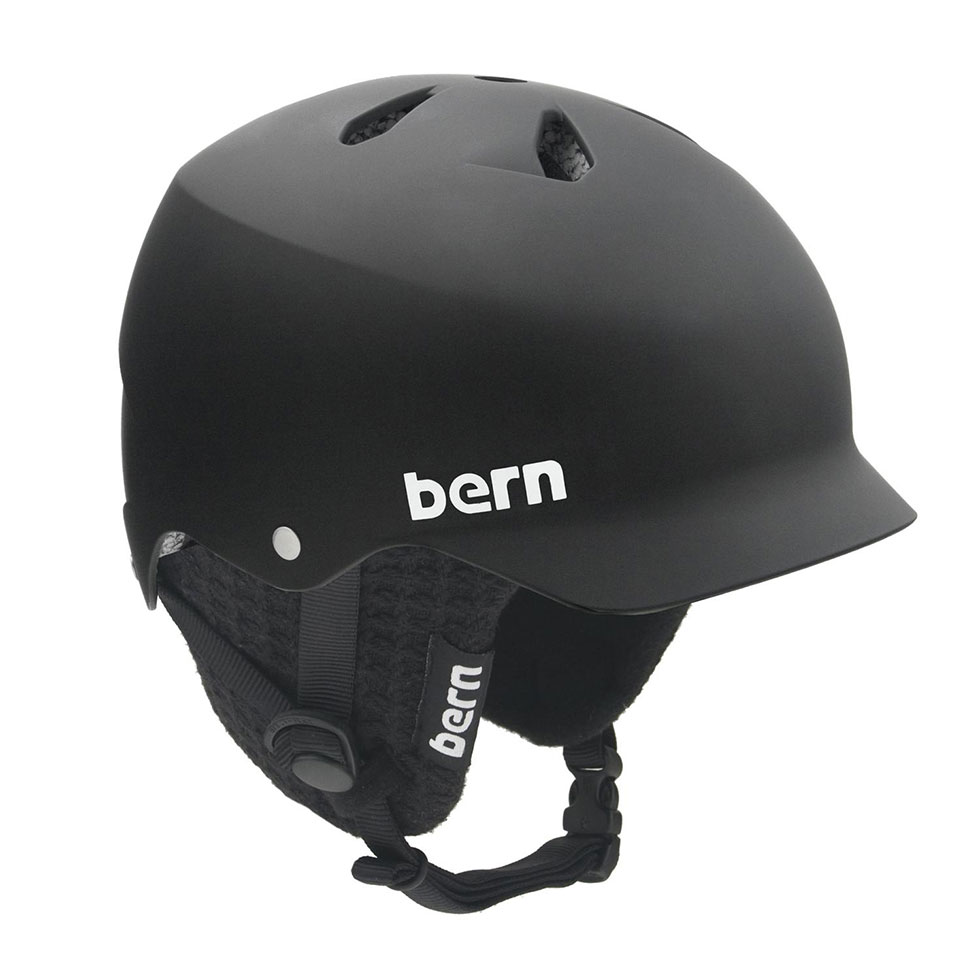 Moving to the interior of the helmet (in this case, we were using the EPS knit liner), since the Bern Watts is an all-season helmet, the easily removable, knit liner has hook & loop (velcro) and button attachments to the inside of the shell. At the crown of the helmet is padding that is thin yet dense enough to add plenty of comfort to the top of the head and to aid in impact. The liner that I was using is the EPS knit liner which is not audio compatible – though there is an audio compatible model of the same for $10 more.

The helmet itself has fantastic lines in my opinion. The roundness of the shell is also something that has helped to set the bar in snow helmet development. The reason for this is that a round helmet has no edges to catch on anything which means less chance of a torsional neck injury when a crash does happen. For me, one of the key features of the Bern Watts is its low profile and the way they’ve been able to keep the EPS foam strong enough to be relatively thin which, in turn, means a lot less of the bubble-head look and for someone with a pretty big head, I strongly support that.

I really like the way the Bern Watts fits. The styling and brim do a great job of making a helmet that truly feels to me as though it’s more of a hat (probably why it’s so super popular with commuting/delivery/urban cyclists). One thing that is a bit off to me is the sizing of the helmet. Now, I’m not saying that there aren’t large size options, but the Bern sizing chart is below and what stands out to me is how the mold size and the actual head size work together. It’s also a bit confusing that the sizes go up to XXXL which, again, is largely based on the mold…even though both XL, XXL and XXXL are all based on the same mold. So, I would make the strong recommendation that you try on whatever sizes you think you may need before you buy it. If you prefer to shop online, make sure your retailer is willing to accept exchanges just in case you need to size up or down. For adjustability, the EPS knit liner has a hook & loop strap across the base of the skull with plenty of play. I like this a lot, especially since the placement give a very secure feel on the head. 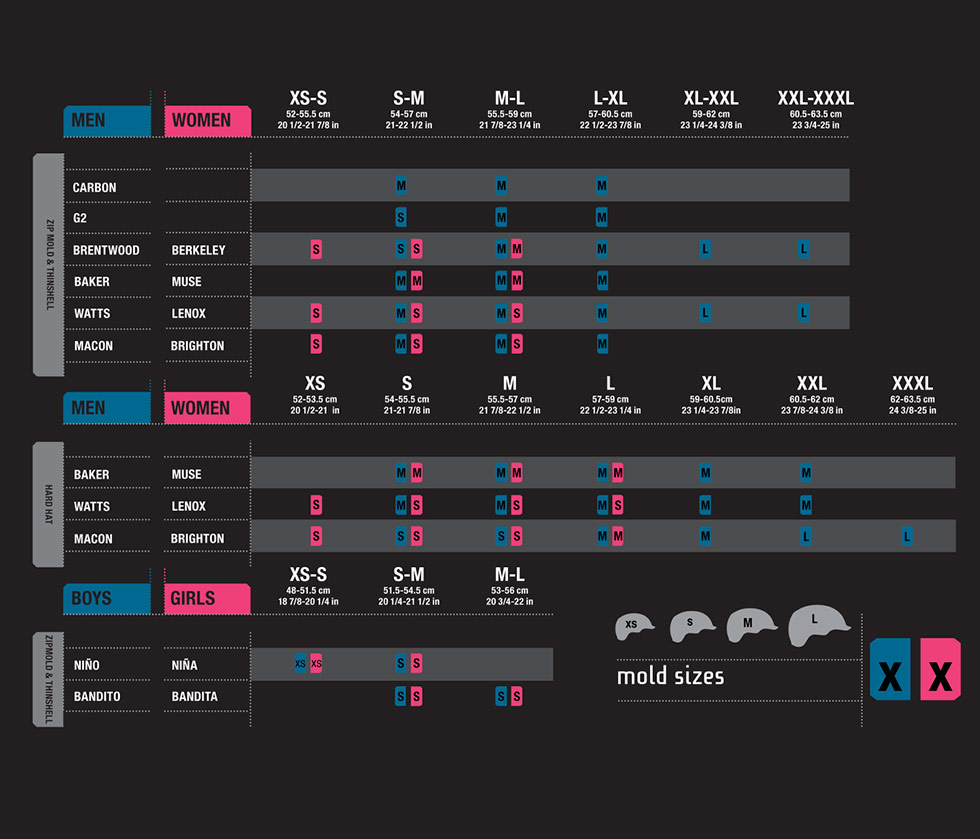 It’s always interesting to judge the performance of a helmet for me. This is because 99% of the time I’ve not actually truly crashed in it and thus, I can’t tell you how it did!

However, what I can tell you is that the Bern Watts has a very long history of saving the brains of a lot of people. Like all EPS hard foam helmets, the Watts is meant to be replaced after one hard crash (did you know that you’re supposed to replace helmets like that?), especially where there is obvious material compromise and their replacement program seems to be a great one which you can find HERE

Apart from the crash performance, the vents are something that I really liked. The Bern Watts has 11 total vents (well, ten vents and one beanie button hole). These vents to a fantastic job of keeping the head comfortable and air circulated very well. One possible drawback is that they’re not adjustable (Bern does have two adjustable vent models with the Kingston and the Rollins). For me, this wasn’t a huge deal though if it were a day colder than those when I went out I can see the potential for some chilliness. 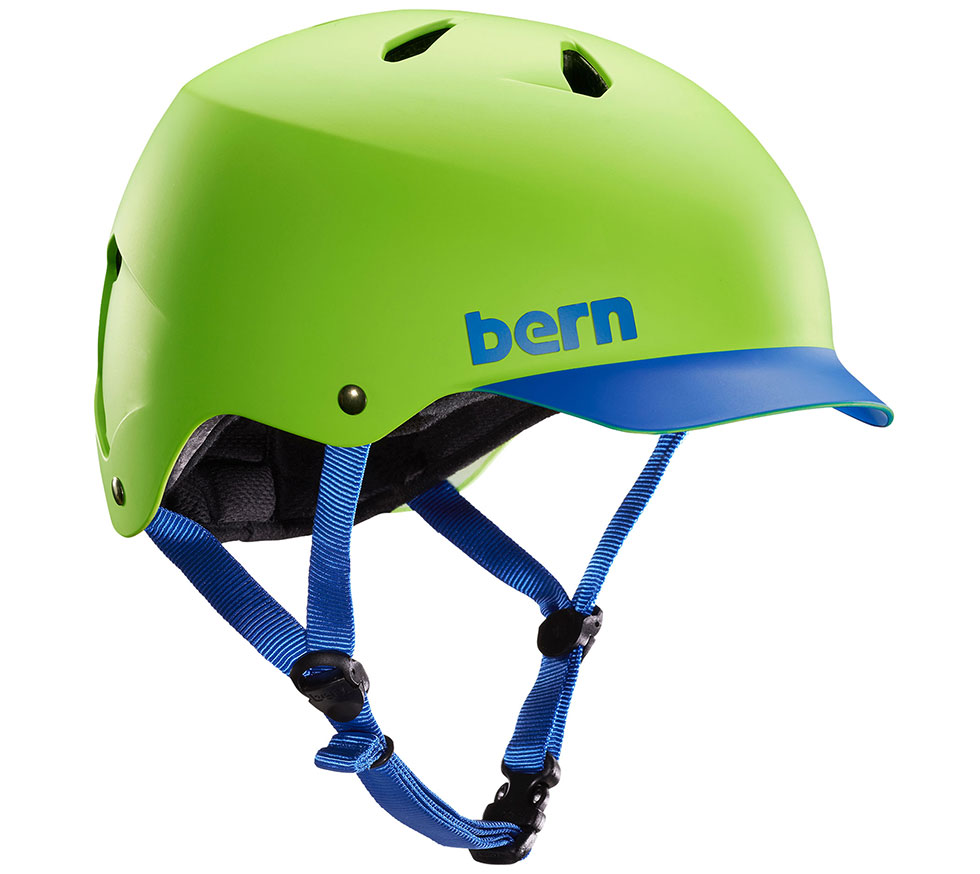 The Bern Watts tips the scales at a solid 19.1 ounces with it’s knit winter liner in as tested and 16.7 ounces with the normal ear-only liner. As for price, there are some really fantastic deals to be had for this classic helmet (we found prices under $50 at the links below) so it’s definitely worth checking out. At the end of the day the Bern Watts helmet was part of being a style pioneer and that, plus it’s really solid construction keeps it as a very solid benchmark.

See it at REI