As a new Honda Accord owner, we got a big surprise when our Catalytic Converter got stolen.  We replaced it and put on a Cat Clamp for good measure.

This review is a little out of character for Gearist.  However, it’s our soapbox and hopefully this will protect other Honda Accord, Toyota Prius and Tacoma owners from Catalytic Converter theft.  Read on…

The CatStrap looks nice with an alarm option, but the overall Cat Strap theft deterrent appearance doesn’t look substantial to me. If you’ve got experience with installing the CatStrap, or have one, let us know in the comments below!

Update Feb, 2022: MillerCat has expanded their line up to include catalytic converter shields for the following vehicles: Toyota Tundra / Sequoia, Toyota Tacomas and finally, The 7th gen Honda Accords!

The MillerCat Honda Accord catalytic converter shield are available for the 2003-2007 Honda Accord.

Available in both Aluminum and Stainless Steel for extra cut resistance, they even have certified installers. Some are actually Toyota dealers.

The big standout over the other Catalytic Converter shields that I found is that thermal testing was a part of Miller’s design process.

Catalytic converters can have a normal operating temperature of 1200 to 1600 degrees fahrenheit and that heat has got to go somewhere. Its good to know that they went through a few design revisions before they released products that won’t trap too much heat and kill your catalytic converter! 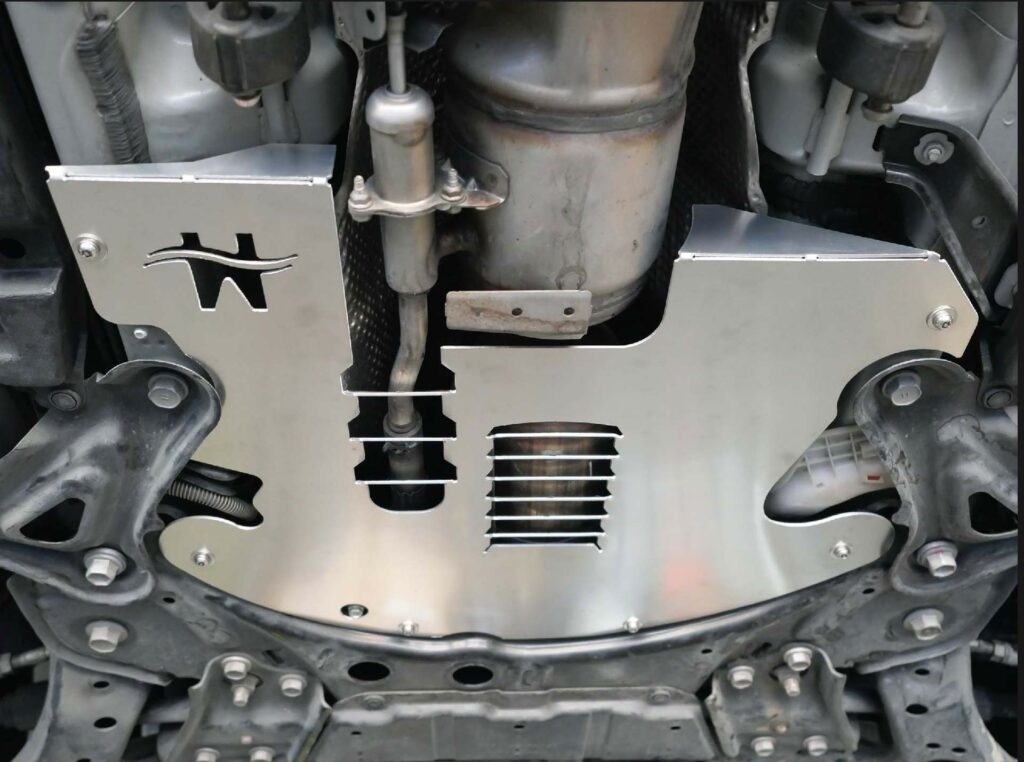 Here’s a MillerCat Cat Shield on a Prius 3rd Gen (2010-2015). Definitely the best looking of all of the catalytic converter anti theft devices and also well thought out by a big manufacturer.  I do wonder if the crazy appearance of the Cat Clamp is a better deterrent for Catalytic Converter anti-theft.

The bad news is they’re only available for the Toyota Prius, Honda Element and the Lexus CT200h so the Miller Cat Shield is a no go on my old Honda Accord. (MillerCat now makes Cat Shields for the 2003-2007 Honda Accord).

Also available is the similar Cat Security Shield from CCM on Amazon. It uses a slightly different fastening system and is only available in Aluminum. The upside is if your Toyota Tacoma Catalytic Converter has been stolen, they got you covered!

If any readers have experience installing or using the CatShield on their Toyota Prius or Honda Element to prevent catalytic converter theft, please let us know in the comments below.

What is a Catalytic Converter and why do they get stolen?

Simply put, a catalytic converter is an exhaust emission control device that converts pollutants in your car’s exhaust to a less toxic exhaust through a chemical reaction with exotic precious metals including platinum, palladium, and rhodium and gold.

This makes them valuable for thieves to sell as scrap, but nowhere near the replacement costs which can run in the thousands of dollars.

Certain cars, like the Honda Accord, Honda Element and Toyota Prius are desirable targets due to the quantity of the metals involved to acheieve super-low emissions (Honda ULEV designations).  Other vehicles like the Toyota Tacoma, Tundra  and 4runner are easy targets because of their ground clearance and multiple units.

The Theft of my Honda Accord Catalytic Converter

When we needed a car we figured a 6th Gen (1998-2002) Honda Accord would make a great city car. Reliable enough to get us places, inexpensive enough not to worry about the daily abuse.

5 days into ownership we got a surprise: some one stole our Catalytic Converter!

How do I know my catalytic converter has been stolen? Well, I started the car one day to a LOUD grumble and a check engine light.  A loud WTF from me and a look under the car revealed a nice clean cut where my Honda’s Catalytic Converter used to be. 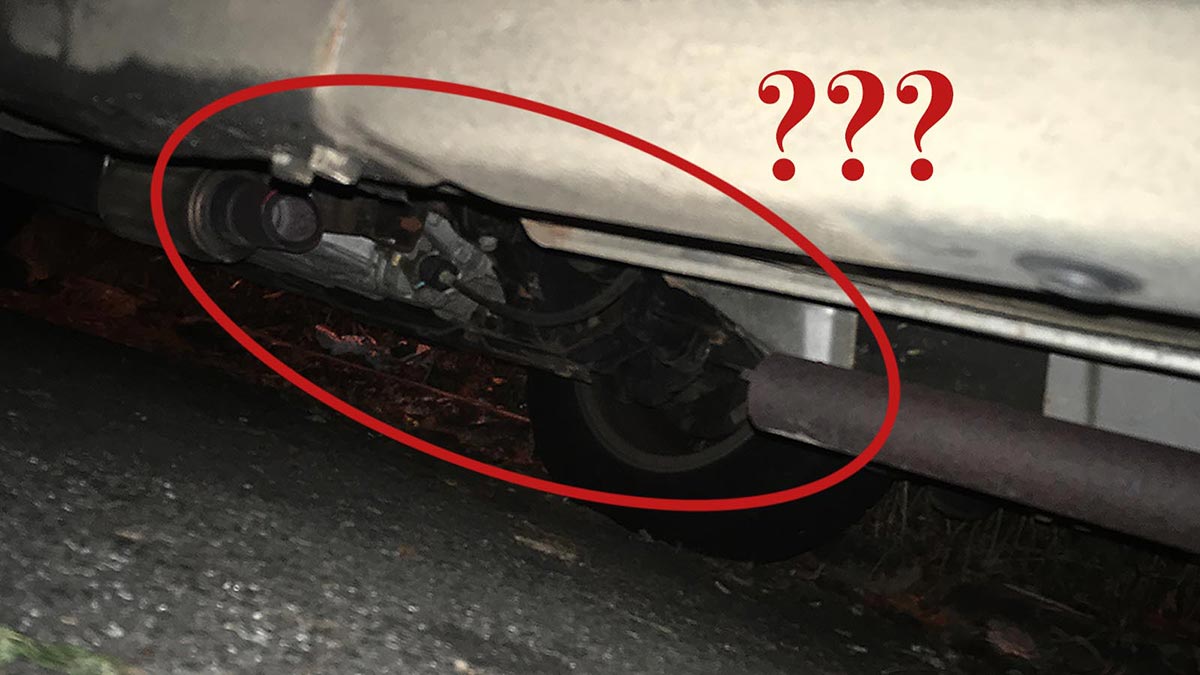 That empty space? That’s where my Catalytic Converter USED to be.

A quick call around left us looking at OEM Honda Catalytic Converter replacements in the $12-1500 range.  No go on my wallet.

An quick online search showed aftermarket Walker Catalytic Converters for my CARB compliant Honda Accord coming in at around $300. (Walker 82901 is around $500 as of early 2021!!) Great option for a DIY job, not so much if you don’t have a garage to do the work.

Most independent garages and mechanics here in NYS will not install an aftermarket Catalytic Converter because of record keeping requirements of a federally mandated device.

I finally came up with a solution to get an aftermarket Cat installed through a friend and got it done.

What is a Cat Clamp Catalytic Converter Lock?

Now I’m thinking “The first theft isn’t so bad, it’s the second time I’ll feel like a idiot”. A little internet searching came up with some horror stories.  It’s apparently super easy to steal a Catalytic Converter.  I found a video of a similar Honda Accord getting its Cat stolen.  The video is 1:07 long, the actual theft about 30 seconds!

Fortunately, the searches also came up with an anti-theft device called the CatClamp Catalytic Converter Lock.

Invented by American Welding Inc. after being approached by a longtime customer experiencing catalytic converter theft of their vehicle fleet, The CatClamp underwent over 18 months of testing and development.  CatClamp claims a 99.9% effective rate for over 5 years running.

The basic premise of the CatClamp is to encase the Catalytic Converter in a hard to cut “cable” cage and attach that cage to several points on the chassis. At first your mind starts running through all of the scenarios that you’d try to get through, but you quickly realize that none of them would really work quickly.

There are some different models available and I chose The CatClamp® Standard Security Kit for our Honda Accord after a quick phone call to their customer service line.  They couldn’t guarantee a fit for the 2000 Accord, but were “pretty sure” it would fit.

The kit basically consists of two split clamps that go on either side of your converter, an assortment of different diameter exhaust spacers, 40 feet of 8mm aircraft grade wire rope, and shear bolts with matching tool with a special head pattern to hold the clamps together.

Install and use of the Cat Clamp

A quick glance at the box contents and directions and I was ready to go. After getting the Honda Accord in the air and being redundant with jack stands, a jack in place and some paver blocks (I know, I know) I crawled around with the Cat Clamp parts, to make sure it would all fit and to pick out some non-moving cable loop points.  There we’re three easy spots I found.

The next step is where it gets a little tricky, all because I did not follow the directions at first.

I started threading the cable from one end through the holes. I figured this would give me one big coil of left over cable at one end to tuck away somewhere. This was a big time suck due to having to thread the full length of cable. There was also too much left over cable that just didn’t fit anywhere tucked away.

The instructions clearly tell you to start with two holes at the MIDDLE of the cable and I’d suggest doing that.

Running out of daylight, I took a cue from the customer install pictures on the CatClamp website. I decided to wrap the cable excess around the Catalytic Converter with a plan to redo it neatly at a later date.

The bad news is it looks like a hot mess. The good news is you don’t see it, nothing rubs or vibrates and the hot mess appearance is probably a good visual deterrent as well. 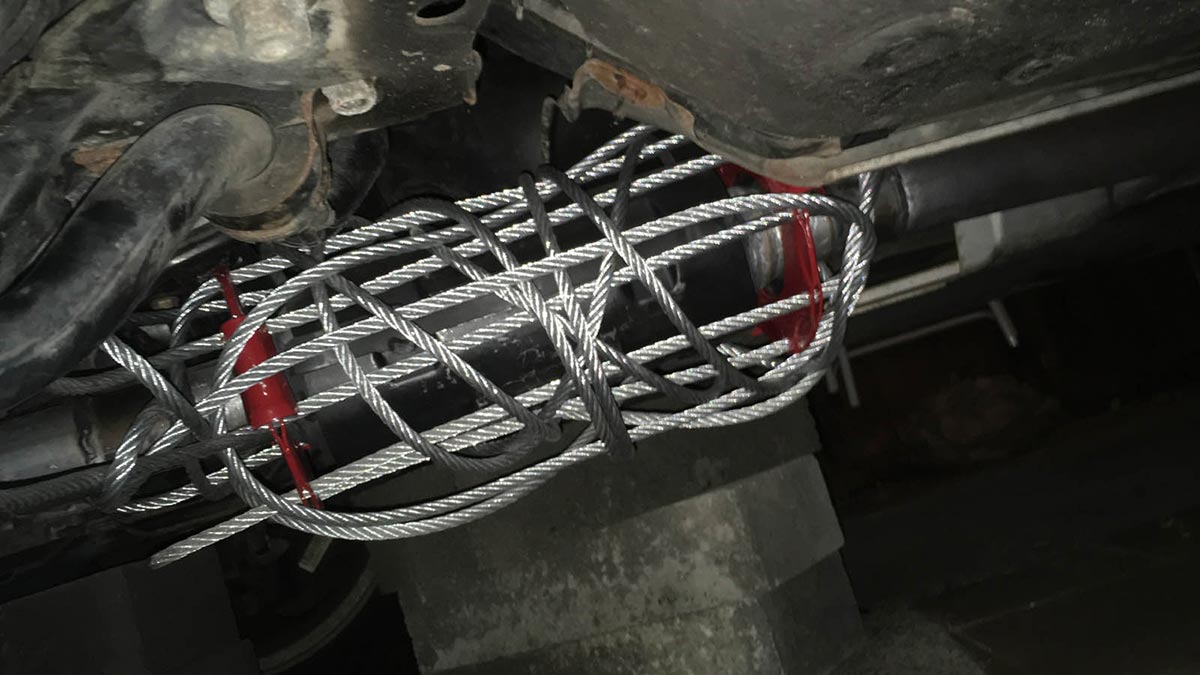 The Cat Clamp Installed!  Looks like a mess, but would you try and steal that?

I’m pretty happy with the CatClamp.  If you or your installer follow the directions, keeping excess cable in mind it should go pretty quickly. Maybe and hour or two for a first timer.

I’ve had it installed for over a year and there’s been no rattling, and nothing out of the ordinary with clearance even with the less than perfect cable wrap that I never redid.

I’m not sure if anybody has tried to steal my Catalytic Converter, but it definitely gives me some piece of mind.