The Evolution Of Bicycle Helmets 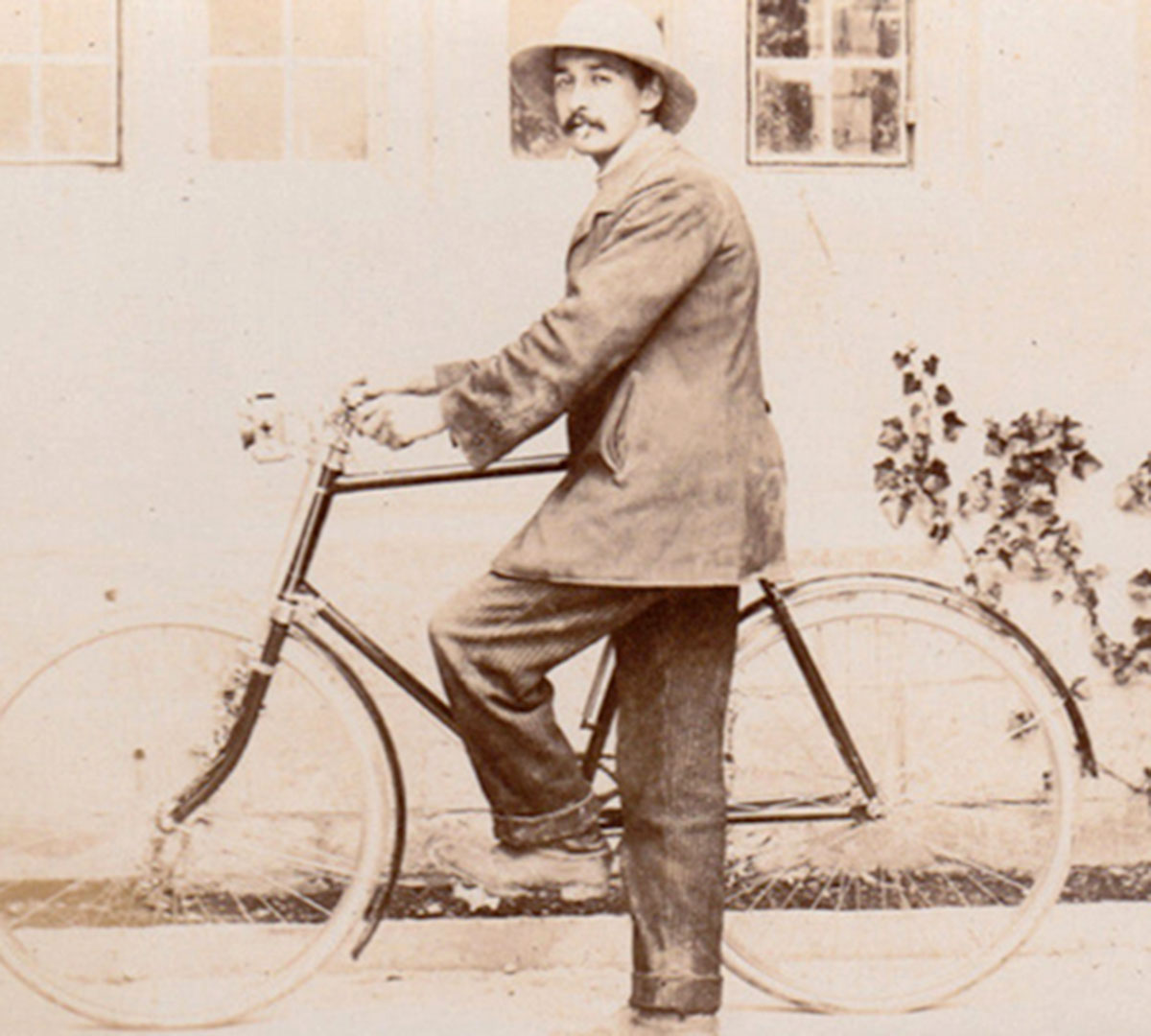 In the cycling world of today, helmets have become a mainstay on the heads of many of us who spend a lot of time in the saddle. While few places have mandatory helmet laws for adults (which, according to many is a good thing: Stop Forcing People to Wear Bike Helmets) many of us still choose to wear them for safety and for peace of mind. But today we’re here to give a brief rundown of the history of the bike helmet from as far back at the 1880’s!

Around 1880, as cycling – high-wheel and non – was growing in popularity, the need for some sort of head protection on the less-then-spectacular roads of the day became clear. Their first (and only) choice at the time was the pith helmet. A plant-based material, pith was readily available and could protect the rider in the event of a crash. The material would be able to take one impact, breaking up in the process, which meant it was time for the wearer to replace the destroyed brain bucket with another.

As the 20th century rolled around, cyclists began to look for head protection that was a bit more suited to their needs. The first helmets built for cycling were a leather, halo-like ring with a wool top. This helmet soon evolved to something better vented with protection for the top of the head as well. The newer helmets still had the same leather halo but added more leather, padded straps across the top of the head in different patterns. Rather than just leather, al of the strapping was filled with padding from materials such as wool or cotton.

This style of bicycle helmet would stay around until the 1970’s when foam covered with plastic shells began to appear. Some of the downsides of the early leather helmets (which were know as cycling “hairnets”) were that the leather would break down due to sweat and the helmets themselves simply were not that effective in crashes except to keep cyclist’s ears an faces from dragging the ground when sliding across pavement.

In the 1970’s and organization called the Snell Foundation (named for Pete “William” Snell who passed away in a car race crash in 1957) began looking to test and standardize protection levels for helmets. the first company to kick off the early version of the modern cycling helmet was Bell Motor Sports which made the “Bell Biker”. This helmet was the first to use a lexan shell over an expanded EPS liner and was the inspiration for what was to come. While some helmets continued to use a softer liner, such as the “Skid Lid”, EPS became the standard for a decade.

In 1984 the American National Standards Institute (ANSI) began using Z80.4, the first set of bike helmet standards for the United States. These standards helped to weed out many of the less-than-safe helmets from the market while at the same time elevating the level of quality for helmets overall. About this time, weight also began to become an issue with helmets. Wanting to build a lighter helmet that would still protect riders, Bell came out with an all-EPS helmet that dropped the outer shell and with it, a lot of weight. In 1986, Jim Gentes started Giro Sport Design to market and sell all-EPS helmets that were vented and covered in a thin lycra cover. While they were certainly lighter, the all-EPS helmets were really only designed to take one hit before failing. In 1989 Pro Tec began inserting a nylon mesh within the foam that would reinforce the structure and durability while still keeping the light weight of the (mostly) all-EPS design.

Another major development in the 80’s was the genesis of aero helmets. These sleek, teardrop shaped helmets were meant to make riders more aerodynamic and slip through the air with greater efficiency. Two, famous examples were Steve Hegg in the 1984 Olympics and the 1989 Tour de France where Greg LeMond donned the Giro Aerohead to crush the final time trial.

It was also around this time that Bell began using a nylon strap and D-ring combination as a means of securing the helmet to the rider’s head. Since this closure method is a bit clunky and takes two hands to operate, it was soon replaced by plastic buckles that are still the primary retention system today.

In 1990 the need for a more substantial shell over the EPS foam of helmets became clear. Instead of the heavy lexan of years past, these new shells were constructed of a thermoplastic polymer called polyethylene terephthalate (PET – milk jug plastic) among other thin, but strong plastics. Apart from holding the helmet together more solidly upon impact, this shell also reduced resistance when/if the helmet found itself (attached to a rider) sliding along the pavement. In this early construction method, the shell and the EPS were then bonded using glue or tape. Soon after, a new method was developed which would allow the EPS to be molded within the shell, making for a much stronger union between the two. Since the mold was to hot for PET to handle without melting, new plastics were used such as ABS. This process got rid of any gaps between the shell and the foam and made it possible for a safer helmet without adding any additional thickness or weight.

Apart from the advances in shell construction in the 90’s, there were other points of focus for helmet manufacturers. One was the use of inner retention systems (dials, etc.) that were meant to keep helmets better in place and thus more protective. Another change in helmet design was a partial remnant of the aero helmets that began to show up in the 1980’s. Many of the helmets began to include sharper angles, especially on the rear of the helmet. Partially, these were a nod to style, but they also sought to increase aerodynamics and ventilation. Detractors have mentioned that these angles also make sliding resistance greater with more chance of one of these angles or cuts catching on the ground.

While the general construction of helmets has remained largely the same, the materials used have become lighter and safer. Part of the weight reduction is due to a more well designed structure that creates a more solid cage around the rider’s head while having an amazing amount of ventilation. In 2012 the rise of aero-road helmets began. These helmets were meant to be used not just on time trial and triathlon events but on daily road races or workouts as well. Gone from these are the long, tapered tails that were the trademark of aero helmets to this point and in their stead are more rounded helmets. These helmets increase aerodynamic efficiency while maintaing goo ventilation and protection for riders.

Throughout the journey of bike helmet’s, while the focus has certainly been on competitive (or at least weekend warrior-ish) cycling, the casual market has received a huge benefit of the technology developed for those whose goal it is to simply go fast. From folding helmets to helmets with air bags, there’s a lot of choice out there to keep your head protected when riding your bike!